"One million people to Taksim" - a call for more anti-government demonstrations later on Sunday - was a top-trending hashtag on Twitter. 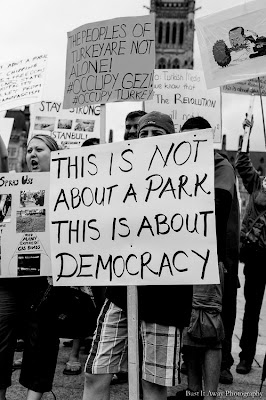 The Taksim Solidarity Platform that represents the Gezi Park protesters has condemned the brutal police crackdown on the Taksim Square, adding that hundreds of people were injured and many had been detained. The platform also contradicted the officials’ statements that said that 44 people were injured, adding that Istanbul’s governor “had lost all credibility.” It also said that police showed a “warlike violence” during the attack.

“There are dozens of injured shot with rubber bullets or who couldn’t go to the hospital,” the platform said in a statement today adding that infirmaries set up at Divan hotel which stands at the Harbiye entrance of Gezi Park.

“The attack with rubber bullets, intense tear gas and stun grenades at a moment when there were a lot of women, kids and elderly people were at the park is a crime against humanity,” the statement said.


Protesters have taken to the streets across Istanbul following a raid on Gezi Park and Taksim Square. Police firing teargas and water cannon had launched an assault on those gathered in the two public spaces.


Overnight into Sunday, demonstrators blocked a highway to Ataturk Airport, while to the east several hundred walked towards a main bridge crossing the Bosphorus waterway towards Taksim Square.

"We tried to flee and the police pursued us," Claudia Roth, co-chair of Germany's Greens party, who had gone to Gezi Park to show her support, told the Reuters news agency. "It was like war."

Two weeks of unrest in which police fired teargas and water cannon at protesters night after night across the country left four people dead and about 5,000 injured, according to the Turkish Medical Association. Protesters camped in Taksim Square opposing plans to build a replica Ottoman-era barracks in Gezi Park, but reduced their presence after meetings with Prime Minister Recep Tayyip Erdogan, who told them Thursday he would put the project on hold until a court ruling.

Though he appeared to have conceded his immediate plans to raze the park, Erdogan did not appear conciliatory on Saturday afternoon, threatening protesters in an address to his flag-waving supporters at a rally in the capital, Ankara. "We have our Istanbul rally tomorrow," he had said. "I say it clearly: Taksim Square must be evacuated. Otherwise, this country's security forces know how to evacuate it."

As police raided the park on Saturday night, panicked protesters fled into an upscale hotel, several of them vomiting, as clouds of teargas and blasts from percussion bombs engulfed the park. In response to the violence, thousands rallied in Istanbul, while protesters also gathered in Ankara around the central Kugulu Park, including opposition MPs who sat in the streets in an effort to prevent the police from firing teargas.

"The police brutality aims at clearing the streets of Istanbul to make way for Erdogan's meeting tomorrow," said Oguz Kaan Salici, the Istanbul president of the main opposition People's Republican Party. "Yet it will backfire. People feel betrayed."

Dissidents remain defiant. A main public-sector union confederation, KESK, which has some 240,000 members, said it would call a national strike for Monday, while a second union grouping said it was holding an emergency meeting to decide whether to join the action.

"One million people to Taksim" - a call for more anti-government demonstrations later on Sunday - was a top-trending hashtag on Twitter.