“Press Release: Abahlali base Mjondolo: We are All Turkish Democrats”: a Statement of Solidarity with the Turkish Struggle 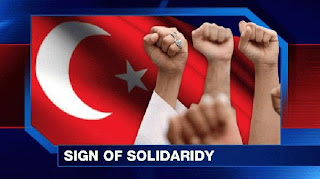 Abahlali base Mjondolo is a democratic, membership based movement of shack dwellers and other poor people in South Africa. In 2005 our experience of suffering and injustice led us to decided to organize ourselves and to represent ourselves. We are struggling for land and housing as a vital step towards the restoration of our dignity and the recognition of our equality.

We have been severely punished by those who want to keep us in our place and we have faced serious repression.

When we have come under attack we have received solidarity from across the world – from Auckland to Istanbul, Nairobi, London and New York.

We have stood with comrades facing repression in places like Haiti and Palestine.

Today we stand with our comrades in Turkey and with all Turkish democrats.

We keep over movement strong by making sure that it always remains in the hands of its members and that we take forward the struggles that affect people’s everyday lives. We call this a living politics. But we take very seriously the fact that the system that has marginalized and oppressed us here in South Africa is the very system that marginalizes and oppresses the people of Turkey. And we have not forgotten that the first people to be in solidarity with our struggle outside of South Africa were the comrades at Sendika and People’s House in Turkey.

Your dignity is our dignity. The politicians and their police who vandalize your dignity vandalize our dignity. In South Africa as in Turkey it is clear that we will not have dignity or peace until there is a fair and equal distribution of land, wealth and power. We stand with you. We struggle with people and not for people and so we will be guided by you as to how we can be most effective in finding ways to build a living solidarity with your struggle.

We have studied the statements from our Turkish colleagues carefully. We condemn Prime Minister Erdogan and his government’s attack on people who are trying to voice out their democratic reactions and demands in the city squares. We condemn his attack on you with despotic measures including tear gas, water cannons, beatings, shootings and threats of civil war. Such attacks are not just undemocratic. They are criminal.

We call upon Prime Minister Erdgan and his Turkish government to stop waging war on democrats and democratic formations.

We call on all progressive movements around the world to stand in solidarity with the Turkish struggle.

We also call upon the South African government to remember how the world stood in solidarity with the struggle against apartheid in its darkest days. We call upon our government to put justice before self-interest, to stop disgracing the memory of our struggle by supporting oppressors and to offer its full support to the struggling people of Turkey.

The undemocratic and brutal practices of the apartheid regime in South Africa gave rise to the popular mobilization that gave birth to our democracy. The growing brutality of the post-apartheid regime is giving birth to new struggles in the shacks, on the mines and on the farms.

We wish to warn that the anger of the poor can go in many directions. We wish to remind all oppressed people, and their oppressors, that once the oppressed realise how much power is in their hands the world can be changed from below. We must never allow our oppressors to divide us. Our power comes from our own recognition of our humanity and the unity that we build on that foundation.

The Turkish Embassy is in Pretoria and we are in KwaZulu-Natal and the Western Cape.

However we will send this letter to our Turkish comrades assuring them of our support for their struggle.

We will send it to the Turkish Embassy in Pretoria too.

And we will be holding a picket in front of the Durban City Hall in solidarity with Turkish people.
Posted by nickglais on 6/15/2013 08:53:00 AM