UK to send troops to Mali for war "War on Terror" in Africa : British Prime Minister Cameron in Algeria


Democracy and Class Struggle  says Cameron's and the Head of MI6's visit to Algeria confirms the interlinked events in this region.

The views of  Dan Glazebrook of the strategic importance of Algeria and its linkages with Mali is contained in the videos below.

Britain does not want to be left out in the battle for resources from Africa - The Ango/French Entente Imperialism is planning the re- Colonialisation of Africa in the 21st century.

The visit of Cameron to Algeria is part of the new Imperialist design. 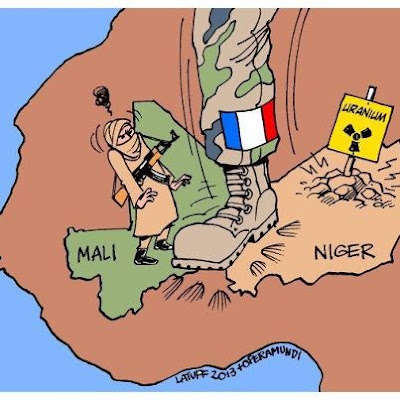 In reality, the dispatch of French commandos to the uranium mines in Niger only underscores the overriding economic and geo-strategic motives behind the French military intervention in Mali. Under the cover of a supposed war against Islamist “terrorists” and a defense of the central government in Mali, French imperialism is using its military might to tighten its grip on its resource-rich former African colonies.


We endorse the views of Dan Glazebrook in the above video

Early claims that this would be a short sharp intervention have been dropped, with the French president saying he would do what it takes to stop Mali and the wider Sahel from falling into hands of groups like Ansar Dine and Al Qaeda in the Islamic Maghreb.

France said it is acting not just in the interest of the Malians, whose president appealed for help, the Africans, and the wider international community.

But some analysts say this isn't' strictly true. They say that by intervening in Mali, France, and her western allies have failed to learn the lessons of Afghanistan, Iraq, and Libya, and that they're really determined to maintain their influence in the mineral rich area of West Africa.

They also complain about the shadow of French colonialism in Africa. So what do Africans think of this dangerous turn of events, and should they be suspicious of the French, British and American claims that they are now the new front in the "war on terror".

More from Dan Glazebrook on video below