British Isles : A total of a million extra children will be in poverty as a result of government welfare measures.The squeeze on tax credits and benefits will push a further 200,000 children into poverty, 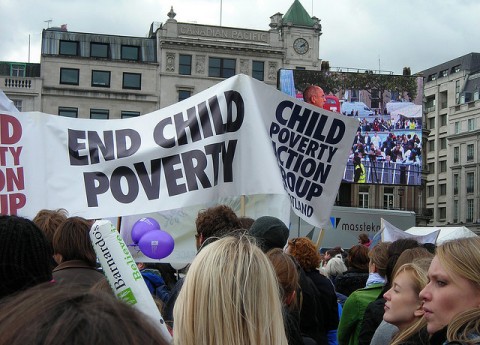 The squeeze on tax credits and benefits will push a further 200,000 children into poverty, the government has admitted for the first time. It suggests a total of a million extra children will be in poverty as a result of government welfare measures.
Ministers have said they no longer regard the relative child poverty statistics as a useful or valid measure.
The extra 200,000 children in poverty figure stems from the government's decision to lift most in-work and out-of-work benefits by only 1% over the next three years instead of increasing them in line with inflation.
Ministers had been reluctant to state what the impact would be on child poverty, an official government measure that looks at the number of households with incomes at 60% or below the national average household income.
But in an answer to a parliamentary question, work and pensions minister Esther McVey estimated that "the uprating measures in 2013-14, 2014-15 and 2015-16 will result in around an extra 200,000 children being deemed by this measure to be in relative income poverty compared to uprating benefits by CPI [consumer price index]".
Ministers are trying to push through the benefit squeeze with just one day of debate for the committee stage and third reading of the welfare benefits uprating bill in the House of Commons next Monday.
Labour said the figures showed children were victims of Tory "political games". Ed Balls, the shadow chancellor, said: "The true character of this Conservative-led government has now been exposed. While they give the richest 2% of earners a £3bn tax cut, 200,000 children will be pushed into poverty and millions of working families made worse off.
"Ministers have spent weeks refusing to admit what the impact of their policies would be on child poverty and now we know why.

Children are paying the price for David Cameron and George Osborne's economic failure and the political games they have decided to play."
Liam Byrne, the shadow work and pensions secretary, said: "The chancellor's pathetic little games have real consequences for millions of families struggling to make ends meet.
"Ten years of Tory party detoxification has been destroyed because the chancellor needed a new-year dividing line and Britain's poorest children are paying the price. The nasty party is well and truly back."
The Child Poverty Action Group (CPAG) also criticised the changes.
The government argues it is "misleading" to consider the impacts of uprating tax credits and benefits in isolation and claims that it is "investing in tackling the root causes of child poverty through making work pay". However, changes to tax credits that came into force in April last year mean that thousands of parents in part-time employment are now better off on benefits than in work.
The parliamentary answer also claims that "looking at relative income in isolation is not a helpful measure to track progress towards our target of eradicating child poverty".
Ministers have for some time been arguing that the relative income measure is unhelpful since it focuses on too narrow a definition of poverty. It has introduced a range of additional measures.
Labour points out that David Cameron, when in opposition, repeatedly argued that relative poverty was important and that the Conservative party would measure and act on it.
The government has previously admitted that some families with children could be £728 a year better off out of work as a result of losing their working tax credits following new rules which came into force in April 2012.
Cameron, in his Scarman lecture in 2006, said: "I believe that poverty is an economic waste and a moral disgrace. In the past, we used to think of poverty only in absolute terms – meaning straightforward material deprivation. That's not enough. We need to think of poverty in relative terms, the fact that some people lack those things which others in society take for granted. So I want this message to go out loud and clear: the Conservative party recognises, will measure and will act on relative poverty."
CPAG added that the 200,000 increase set out in the written answer should be added to the 800,000 increase in children in relative income poverty by 2020 that the Institute of Fiscal Studies (IFS) found in its analysis of the coalition's welfare cuts.
The group said: "This now makes it a total of a million children that the coalition's policies are expected to push into relative income poverty by 2020.
The IFS analysis included the impact of a fall in poverty due to the introduction of universal credit.
CPAG also claimed the government had revised down the number of children that would be taken out of poverty due to the universal credit from 350,000 to 150,000.