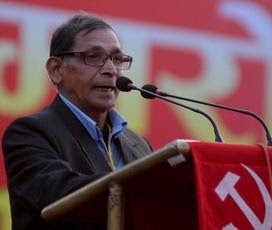 KATHMANDU: Seventh national convention of the CPN-Maoist concluded by forming a 51-member central committee today. The CC will be led by Mohan Baidhya to steer the people’s revolt on the foundation formed by the people’s war.

Khadka said the three leaders have been discussing with the top leaders regarding their differences and will make their views public within a few days if necessary. The convention also decided to continue with the existing office bearers and spokesperson and the invited central committee members Mousam Limbu and Laxman Panta are now full-fledged central members.

Addressing the closing session of the convention Chairman Mohan Baidhya said the unity convention of all the proletariats has become victorious in its fight against the revisionism. On behalf of the martyrs’ families Takma KC said the party has again resurrected the revolution, and has also warned the leaders not to let the people down.

Chairman of the advisors board Krishna Das Shrestha said Marxists and revisionism cannot remain at one place and therefore split was inevitable and has praised the leaders for adopting a revolutionary party line.

Representative of the Marxist and Leninist Communist Party of Turkey, Lena congratulated the leaders of CPN-M during the concluding ceremony and had wished success to the party’s new revolutionary line.