Marikana: A View from the Mountain and a Case to Answer - book launched today at University of Johannesburg 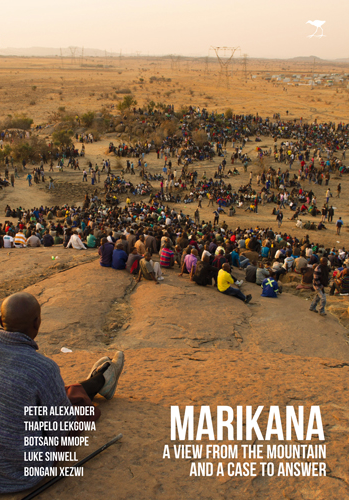 Marikana: A View from the Mountain and a Case to Answer,


is authored by UJ professor Peter Alexander, the South African


Research in Social Change, and a team of researchers that includes

The launch will be facilitated by Prof. Adam Habib, UJ’s deputy vicechancellor


for research. The event will also be addressed by one of the


leaders of the Marikana strike and by the authors.

The heart of the book is a series of interviews with strikers, most of


were killed on 16 August. Prof. Jane Duncan, chair of Media and


a bottom-up account of the Marikana story, to correct an imbalance


in many official and media accounts that privilege the viewpoints


of governments and business, at the expense of workers.’ Prof. John


Saul, the Canadian political scientist, one of the world’s top experts


on liberation struggle in Southern Africa, comments that the book is:


‘well written, extremely scrupulous in its research and forceful in its

Despite the relevance of the book for the work of the inquiry, and


to receive a copy, arguing that to do so ‘may create a perception of


bias on the part of the commission’. Alexander comments: ‘The launch


not want to consider’.

The book is published by Jacana Media, and press copies are available