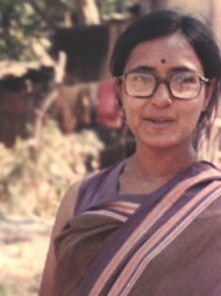 Apart from historicizing the caste question in its emergence and feudal mode of production, Com. Anuradha wrote perceptibly in the Anti-Brahminical and Dalit Movement in Colonial and Post-Colonial India, including mapping the anti-Brahminical Bhakti Movement. Her writings on Phule, Ambedkar, Periyar and Dalit assertions in Maharashtra assumes importance because those were important milestones in the sub-altern resistance to Brahminical oppression in India.

The anti-Brahminical movements in India, especially in Maharashtra, are important because the specific characteristics of Indian caste feudalism and the way it was transformed and yet essentially maintained by British colonial rule, defined the specific anti-feudal tasks of the Indian revolution. The most basic anti-feudal task the land question took on, was the extremely complex features as a result of Indian caste feudalism. Because of the way in which hierarchical relations were maintained within the village and among the exploited classes themselves, and because of the way in which productive work for the land was institutionalized through the jajmani/palotedarisystem, it was insufficient to look at the land question simply in terms of landlordism. Similarly, the slogan of ‘land to the tiller’ was abstract and insufficient in the Indian context without understanding the overall Brahminical domination. For the fact was that much of the land had two tillers– the cultivating middle caste peasant, whether tenant or ryot, and the Dalit field servant, whose connection to the land was equally long-standing.

The very inequality among the exploited, institutionalized through the feudal caste hierarchy, meant that the need for creating unity in the context of resolving land question was crucial. It is hard to see how this could be done without a specific programme of action constituting poor peasants including Dalits, as well as caste Hindu toilers who would have the responsibility of seizing and distributing the village lands and instituting necessary programmes of co-operative and collective agriculture.

Though attempts were begun by the Dalit castes from the late 19th century to organize themselves, the various sections of Dalit liberation movement really began to take off from the 1920s in the context of the strong social reform and anti-caste movements, which were beginning to develop a genuine mass base. The non-Brahmin movements in Maharashtra and Tamil Nadu especially provided an important support. It is not accidental that Jyotirao Phule, the mali (gardener caste) who lived in the middle of the 19th century, made the initial ideological advances and formulated a theory of Brahminism and ‘Irani Aryabhat’ conquest turning the Aryan theory upside down to identify with the original ‘non-Aryan’ Shudra and anti-Shudra inhabitants of the country.
Dalits, to some extent, were organizing the 19th century also. An early attempt in Maharashtra was the movement of Gopal Babu Wangankar. Much organizing focused on the effort to regain their rights to serve in the British Indian Army, which they had helped till the 1870s, but which was then withdrawn from them. It was in the 1920s, however, that the Dalits began to organize strongly and independently throughout many regions of India. The most important of the early Dalit movements were the Adi-Dharma movement in Punjab (organized in 1926); the movement under Ambedkar in Maharashtra, mainly based among Maharas, which had its organizational beginnings in 1924; the Nama-Shudra movement in Bengal; the Adi-Dravida movement in Tamil Nadu; the Adi-Karnataka movement; the Adi-Hindu movement mainly centered around Kanpur in UP; and the organising of the Pulayas and Cherumans in Kerala. (For details see Mark Juergensmeier, “Adi Dharm: Origins of a Revolutionary Religion” University of California Press; Eleanor Zelliot, “Learning the Use of Political Means: The Mahars of Maharashtra”. In: Rajni Kothari, ed, "Caste in Indian Politics", Orient Longman, 1970. J.H. Broom-field, "Elite Conflict in a Plural Society: Twentieth Century Bengal" (University of California Press, 1968).

In most of the cases the Montagu - Chelmsford Reforms provided a spark for this organization of Dalits, but the crucial background was the massive economic and political upheavals of the post-war period. The movements had a linguistic-national organizational base and varied according to the specific social characteristics in different areas, but there was considerable all-India exchange of ideas and by the 1930s this began to take the shape of all India conferences with Ambedkar emerging as the clear national leader of the movement. The founding of the Scheduled Castes Federation in 1942, and its later conversion into the Republican Party, gave Dalits a genuine all-India political organization, though this remained weak, except in certain specific localities, and did not by any means constitute the entire Dalit movement (Bharat Patenkar, Gail Omvedt: The Dalit Liberation Movement in Colonial Period). Writing about the Non-Brahmin movement in Maharashtra led by Jyotiba Phule, Com. Anuradha says, "The movement began with the founding of the Satyasashodak Samaj in Pune. The rise of Satyasashodak Samaj (SS) took place in the context of a rise of Brahminical Hindu revivalism in western India in the 1870s, with its base in Pune, which put the upper caste reformers on the defensive. After working as a social reformer for almost 20 years, Jyotiba Phule founded the SS in 1873 in Pune. The main task of the SS was to make the non-Brahmins conscious of their exploitation by the Brahmins. Phule himself belonged to the malicaste, a caste involved in the cultivation of vegetables, and their trade in the vicinity of Pune. His family was middle class and he was educated in a mission school. The SS did not restrict its activities to any particular caste and worked among the various non-Brahmin (NB) castes in the rural areas of Thane, Pune and later in other districts in Bombay Province and Berar. They also worked among the workers in the textile mills of Bombay. The songs, booklets and plays written by Phule used a popular hard-hitting style and language to expose the various ways in which the Brahmins duped the people, especially the peasants. The SS interpreted the racial theory of the origin of caste in the context of popular tradition - the Aryan invaders had enslaved the local peasantry, the rule of Baliraja, the peasant king was defeated - showing the links of the SS with the democratic sentiments of the peasantry.

In Phule's time, the SS campaigned for social reform - they rejected their own feudal-style marriages and adopted the SS marriages, which were based on principles of equality, mutual respect and loyalty between husband and wife. The SS reform campaign in Phule's time led to a strike by barbers who decided not to tonsure widows leading to tensions in the village. Phule ran a paper called Din Bandhu. His main supporters were Telugu contractors and workers in the textile mills. The first reformist organization among the textile workers of Bombay, the Mill Hands Association, was formed in 1890 by N.M. Lokhande under Phule's guidance. This association represented the grievances of the mill workers till it was pushed aside by the militant trade unions that emerged among the workers in the aftermath of the First World War. Phule promoted modern agriculture among the peasantry and personally bought land to experiment and set an example before them. He was influenced by the democratic American writings of Tom Paine and the principles of liberty and equality. He wrongly believed that British rule had destroyed the role of Brahmins and brought modern education to all castes, and hence was a supporter of the colonial rule in the country.