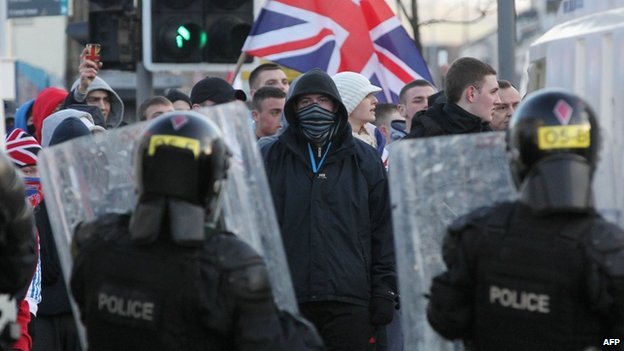 
Cruel Britannia »
Feargal Mac Ionnrachtaigh condemns the attempt to sectarianise poverty, insisting that it must be eliminated and not used as a vehicle to gain party advantage
With Belfast under siege from Loyalist intimidation, riots and violence for this past month, it’s interesting that the media has facilitated the revival of the unionist grievance narrative that emphasises the exclusive marginalisation being ‘suffered’ by the unionist community since the onset of the peace process. In recent weeks, we’ve heard unionist politicians, recognised loyalists, ‘community workers’, church representatives and prominent reporters trying to ‘explain’ the daily destruction within the context of apparent disadvantage being forced on loyalist areas.
According to this false analysis, we’re led to believe that the new dispensation has fostered unique discrimination against the unionist working-class while funding resources, investment and employment has been re-directed towards the nationalist community. All the available objective evidence, however, indicates that nationalist communities suffer disproportionately amongst the poorest neighbourhoods in the six counties.
The Northern Ireland Research and Statistics Agency (NISRA) undertake extensive analysis of the various figures that highlight multiple deprivation in the 582 wards in the North. The status of these wards are ranked according to indicators such as income, employment, health, disability, education and training.
Although each particular indicator is classified individually, all the respective data is accumulated and assessed comparatively thereby drawing a very comprehensive picture of the most socio-economically deprived communities in this statelet. This cross-thematic measurement underlined the fact that eight of the ten most deprived areas and fourteen of the top twenty are situated in nationalist communities in comparison to only four in unionist areas and two that constitute demographically mixed areas.
The same patterns were clear and even more demonstrable in crucial indicators such as family income and employment where 16 of the 20 poorest wards are based in nationalist areas with North and West Belfast and Derry City particularly prominent. These figures were endorsed by the Peace Monitoring Report 2012 which stated that the proportion of people who are in low-income households is much higher among Catholics (26%) than among Protestants (16%).”
There are undoubtedly socio-economically disadvantaged loyalist areas that have been left behind, and this inequality requires urgent action. The above figures prove, however, that there is no substance to the mythological claims that the unionist working-class are losing out to their nationalist neighbours, who remain predominately out in front in every measurable criteria that assess objective disadvantage in the North of Ireland.
Inaccurate and false analyses to the contrary serve only to sectarianise poverty and ghetto warfare while also stifling honest efforts to build grassroots community reconciliation between marginalised working class unionist and nationalist communities that bore the brunt of the political conflict in the North.
Such a divisive agenda must be challenged to ensure that the political establishment, its state departments and statutory agencies understand that such blatant disregard of the facts simply isn’t acceptable. The authorities are statutorily obligated to tackle marginalisation and disadvantage in the poorest communities regardless of religious affiliation. This entails focusing on accurate facts and objective need when distributing the requisite resources that our citizens are entitled too.
Posted by nickglais on 1/17/2013 04:59:00 AM