Condolences on the death of Dipankar Chakroborty (71), the founder-editor of the independent Left journal, ANEEK 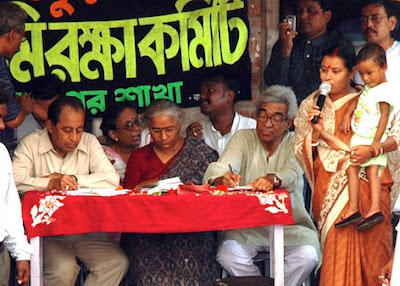 Mahasveta Devi, Sankhaya Ghosh and others condoled the death of Dipankar Chakroborty, the editor of Left journal ‘ANEEK’.

Dipankar Chakroborty (71), the founder-editor of the independent Left journal, ANEEK, passed away on Sunday night. A cardiac patient, he had suffered respiratory problem last evening and died on the way to hospital. He is survived by his wife, son and daughter and grandchildren.

He was born in Dhaka in 1941 and grew up in Murshidabad after the partition. Educated in Baharampur and Kolkata, Chakroborty taught economics at Krishnanath college at Baharampur. he later settled in Kolkata.

A veteran of the Left movement since the sixties, he began publishing and editing ANEEK since 1964 when ruptures in the CPI on ideo-political issues led to first split and birth of the CPI(M).

In the wake of the Naxalbari uprising three years later that had triggered the second split and birth of the CPI(ML), Chakroborty did not join the new party. But he made ANEEK an independent forum for debates on contemporary communist movement, both national and international.

Under his stewardship, ANEEK has become one of the leading left periodical in Bengal and among the few ‘little magazines’ which have survived five decades against all odds. He himself was an accomplished political commentator and had several books to his credit. Chakroborty was jailed by the S.S Roy government during the Emergency.

A life-long defender of human rights, he was also one of the founders of Association for Protection of Democratic Rights and its vice-president.

He was always active in the campaigns of release of political prisoners irrespective of the creed of the ruling parties and governments since the seventies. He stood by peoples’ movements and joined protests in their support despite his failng health– from Maruti to Nonadanga.

He was also one of the founders of Peoples’ Books Society, a major publication house and a enthusiast of Little Magazine movement in Bengal.

Noted novelist and activist Mahasveta Devi who knew Chakroborty closely expressed her ‘profound shock’. ” I am deeply grieved. It’s an irreplaceable loss for the human rights movement as well as for me,” the octogenarian writer said. Poet Sankhaya Ghosh, also mourned Chakroborty’s death. ” I feel like losing a near and dear one,” he said.
Posted by nickglais on 1/29/2013 04:10:00 PM