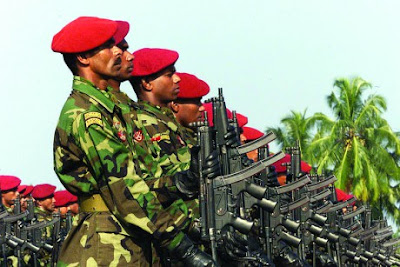 After spearheading an internationally-coordinated counterinsurgency (COIN) operation against the LTTE which resulted in an internationally abetted genocide of the Eezham Tamils in May 2009, in which India played no small a role, Sri Lanka now claims that it can offer training to Indian and other military forces in COIN operations. The commitment of General Bikram Singh, the Chief of Army Staff of the Indian Army, to Sri Lanka’s security and his implicit appreciation of the Sri Lanka model of COIN by his statements at the passing out parade at Sri Lanka Military Academy on 22 December should be a cause of concern for progressive civil society activists in India, for while the ‘Sri Lanka solution’ was possible in its specific case only by a combination of geo-political factors and genocidal intent, it holds out lessons that could threaten democratic traditions in any country.

"With significant experience on both sides, we have a lot to learn from each other and we look forward to reinforcing our cooperation in the military domain further," Gen. Bikram Singh had said at the parade, the Indian Express reported.

The Express also cited Gotabhaya Rajapaksa’s response to Bikram Singh’s visit, "When I met Gen. Bikram Singh, I renewed our offer to train Indian forces in counter-insurgency. We have designed courses in this field and have offered them to other countries facing terrorism. It is now up to the Indian army chief to decide.”

Till now, Sri Lankan military officers have been going to India to receive advance military training, especially in India’s elite military institute Counter-insurgency and Jungle Warfare School in Mizoram and the School of Artillery in Maharashtra, while attempts to train Sri Lanka Air Force personnel at the Indian Airforce base in Tambaram, Chennai have had to be cancelled owing to strong protests by people in Tamil Nadu and the state government.

Indian forces have also been undertaking joint exercises with the genocide-accused military of Sri Lanka.

But this is the first time that the Defence Secretary of Sri Lanka has so explicitly offered to train Indian forces in COIN.

India has been accused of aiding Sri Lanka in its war on the Eezham Tamil nation, shielding the GoSL at international forums, and still politically abetting the genocidal reconciliation model of Sri Lanka, which in practice means colonization and militarization of the Tamil homeland while harping on 13 Amendment as a political solution.

India already generated considerable disrepute among Tamils world over for the atrocities committed by the Indian Peace-Keeping Force (IPKF) during the period of their deployment in the Tamil homeland from 1987-90.

But the Indian Military taking up the Sri Lanka model of COIN can have ominous repercussions for the people of India in particular and the region in general.

India currently in its territory faces quite some movements that challenge the authority of its government. In Kashmir, which has the largest deployment of the Indian military, the movement has changed from a classic insurgency to more and more of mass demonstrations.

Likewise, most of the insurgent movements in the North-Eastern states of India have mostly watered down in intensity, and are at different stages of negotiation with the Indian government currently.

Even the NSCN(IM), probably the longest running insurgency in South Asia, is a position of strategic weakness despite its ceasefire with the government of India, with quite some of its important leaders arrested in the recent years.

While Indian military presence is concentrated in the above mentioned regions, it is the Maoist movement in the heartlands India that elicits great attraction from Indian defence analysts and internal security experts in recent times. Likewise, post-May 2009, quite some have openly advocated the adoption of the ‘Sri Lanka solution’ to deal with the Maoists.

The Maoists, also popularly known as the Naxals, have been waging an armed struggle against the Indian state ever since 1967 to bring about a ‘New Democratic Revolution’ in India, whose society they argue is ‘semi-feudal and semi-colonial’.

Beginning as a peasant movement in the Naxalbari village in West Bengal and gaining momentum in the state of Andhra Pradesh among the poor peasantry before being contained by police and elite commando operations, the core fighting forces of the Maoists is now largely spread over the mineral rich states of Jharkhand, Chattisgarh and Orissa.

In these states, they are said to enjoy support of tribal populations who fear displacement owing to corporate mining and the creation of Special Economic Zones Reports also claim that that more than one fourth of India’s 640 districts are Maoist affected.

The terrain, the nature of the actors involved, the geo-political significance of the contested region, the intention of state in relation to the people siding with the insurgents, the political goals of the insurgent are qualitatively and quantitatively different from the case of the conflict in the island.

Likewise, while Sri Lanka has approached the Tamil national question purely through a military lens, which is necessary for it to execute a protracted genocide, the Indian state views anti-Maoist operations as a primarily police work. Though the use of the military has been mulled, many senior Indian military personnel have advised against it, claiming that the ‘tribals are after all our own people’.

The ‘Sri Lanka model’ ticked not because of a home planned insurgent-focussed military strategy, but because of globally coordinated moves by establishments with vested interests in the island to curtail the political space of the Tamil national struggle combined with a military approach of a state with genocidal intent, that used a superior air force, equipped by world powers, keeping Tamil civilian support for the movement as its primary target using ‘terror bombings’.

That the entire Tamil population was the target for the Sri Lankan state is clear even after the ‘post-war’ scenario, where systematic repression of civil space, torture, abuses, disappearances, rapes of the Eezham Tamil people takes place hand-in-hand with militarization and colonization of the Tamil homeland.

Is this the COIN lesson that the Indian military seeks to learn from Sri Lanka?

The Indian Air Force had already used strategic bombings and strafing as COIN ops in the 1960s against the insurgency led by the Mizo National Front in the North-Eastern parts of India. While these did not cause much loss of life, it caused great destruction of civilian property and displacement.

The Mizo insurgency, however, fizzled out after the signing of the Mizoram Accord in 1986, which led to the creation of the state of Mizoram under the Indian constitution, with special provisions for it as a Union Territory.

But India is yet to use the type of ‘terror bombings’ that Sri Lanka has deployed on the Eezham Tamils on any insurgency in its territory.

While air power was suggested by some in the Indian establishments to be used against the Maoists, it was turned down by others in the Indian military.

But the flirtations of higher echelons of the Indian military with the ‘Sri Lanka model’ do give rise to apprehensions that such methods may be more strongly considered in the future.

The other COIN lessons that can be lifted from Sri Lanka are equally disturbing.

Intensifying military and air assaults on civilians so as to break their morale in supporting insurgents, strengthening the hands of paramilitaries and to give them a free run in unleashing a proxy unaccountable terror, ensuring zero access of external media into the conflict zone but for those who will toe the government line, and lastly, creation of ‘special military zones’ on former sites of resistance to monitor a suspect population and brutally enforce the state’s authority on them.

Few of these methods have been tried by India in the Maoist areas, especially the use of paramilitaries like Salwa Judum in the state of Chattisgarh. Adoption of the ‘Sri Lanka model’ might encourage a full thrust on most or all of these measures.

For all its flaws, India has a rich history of democratic dialogue as well as people’s resistance right from the freedom struggle in the colonial period, to struggles against caste oppression and economic and social inequalities, movements for linguistic freedom and other reformatory cultural movements.

All of this will be in check if the ‘Sri Lanka model’ is accepted as a legitimate model for COIN for even without genocidal intention, the effect of this model can effect in nothing less than a creation of an apparatus of genocidal or totalitarian repression.

Whether the democratic movements in the Indian civil society and the progressive intellectual circles would be willing to address this ‘unholy nexus’ before it mutates into something potentially dangerous is the question of political analysts in Tamil Nadu.
Posted by nickglais on 1/05/2013 11:05:00 AM