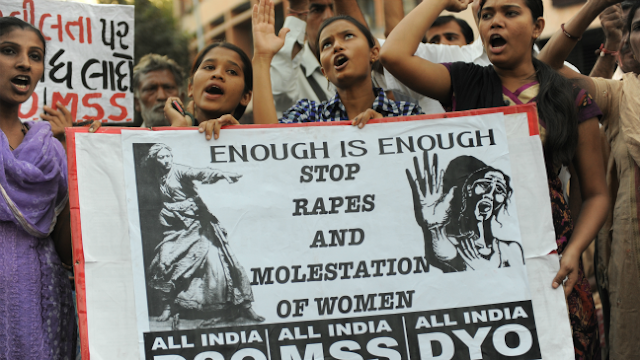 
As India prepares to celebrate its 63rd Republic Day on 26 January 2013, Delhi is trying to come to terms with the recent gang rape of a young woman on a moving bus and her subsequent death. Such rapes have become rampant in the Indian cities and towns. Few months ago London Guardian commented India to be the worst country for women among the G20 nations. Indian rape laws are stringent enough; however, the executive and the judiciary are so much feudal and patriarchal that the conviction rate for rape cases in India between 2001 and 2010 was 26%. In the case of Muslim and Dalitwomen the rate of conviction is almost nil as evident from the gang rape case of Bhanwari Devi in Rajasthan.

However a bigger dimension to this is that the Indian state itself has proved time and again to be the biggest perpetuator of rapes and all forms of assaults on women. State violence is institutionalised through a culture of institutional impunity to the police, the paramilitary and the army. In June 1984, hundreds of Sikh women were gang raped in the sanctity of golden temple by the Indian Army during ‘Operation Blue Star’. In the village of Kuman-Poshpura in Kashmir valley, about 100 women were mass raped by the Indian Army in a single night of 23rd Feb 1991. Hundreds of Muslim women were gang raped by security forces during the anti-Muslim riots in Gujarat in 2002, as the Chief Minister Narendra Modi just watched. The brutal gang rape and execution of 32 year old Thangjam Manorama in Manipur in July 2004 is another example of Indian Army’s ongoing repression on women in the North-East.

Thousands of miles away from the glittering neon lights of New Delhi , the plight of Dalit and Adivasi women is much more miserable in the mineral-rich states of Chhattisgarh, Orissa and Jharkhand in central and eastern India . The Indian government has deployed there more than 75,000 paramilitary forces, established an Army base and building air strips for the Air Force with the sole aim of forcefully displacing millions of indigenous people from their lands and to pave the way for multi-national corporations (London based Vedanta being one of them) to setup mining and related industries and to loot their natural resources. The paramilitary forces conducting military operations code named ‘Operation Green Hunt’ are raiding villages, burning homes and crops, raping women and killing villagers. The most recent incident is the well known ‘Bijapur Massacre’ that took place in Kotteguda village of Chhattisgarh on 28th June 2012. As reported by Srinivasan Jain of the Indian news channel NDTV, 17 innocent villagers - three of them being young women – got killed in an indiscriminate firing by the paramilitary and nine of the dead were juveniles of 12-16 years of age. This is seen as a continuation of the state-sponsored infamous‘Salwa Judum’, during which villages were burnt and women were gang raped before having their breasts sliced and got killed for demanding their rights over their ancestral lands. Hundreds of women, arrested on fabricated charges are still languishing in jails for years, facing torture and rape.

The worst and widely known case of custodial rape and torture is the case of Soni Sori, a school teacher from Chhattisgarh, who was subjected to the worst forms of torture in police custody in October 2011, including being raped repeatedly, subjected to electric shocks, and having stones inserted into her rectum and vagina by the SP of the district police. As she still languishes in jail waiting for justice, the same SP was awarded with Gallantry Award by the President of India, Mrs Pratibha Bharati on the Republic Day in January 2012.

Indian workers Association (IWA-GB), condemns the violence and sexual assaults on women and demands to bring the perpetuators of all rape, arson and extrajudicial killings to justice immediately. It demands immediate withdrawal of army and paramilitary forces from the central and eastern Indian states, Kashmir and the North-eastern states. It demands immediate release of thousands of villagers, both men and women, arrested on false charges and jailed for years and without trial. IWA gives call to all to fight against patriarchy, the feudal institutions such as Khap Panchayats and the onslaught by the state.