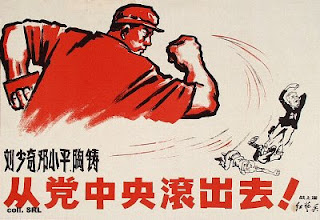 Likewise on 26th December a joint statement was released by 9 organisations, including Arab Maoists.  But it is a matter to surprise that newly formed NCP-Maoist Party did not show any graveness to remember  Comrade Mao, and his contributions.

They released a press statement of four sentences, just for formality. In fact, it was an unwillingly released press statement.  Not only this, daily news paper Janadish, the organ of CPN-Maoist also did not speak even a single word on the  birthday anniversary of Comrade Mao Tse-Tung.

To remember Comrade Mao means to stand on the side of proletarian revolution and to denounce all types of revisionism, eclecticism and liquidationism. We appreciate the declaration of Arab Maoists and other organizations, and express our strong solidarity with them.

As they have mentioned: "We reaffirm the validity of Marxism Leninism Maoism as the science of the world proletarian revolution. We defend the legacy of our teachers Marx, Engels, Lenin, Stalin and Mao; the historical experience of the international workers movement, learning from their victories and defeats in the great battles to build the organization International of the Communist, to lead the masses to the triumph of the Revolution of New Democracy and Socialism, and to build the new State of the Dictatorship of the Proletariat. We reaffirm our unwavering determination to fight for the unity in a new Communist International based in Marxism- Leninism- Maoism absolutely necessary to lead the world proletarian revolution to victory over the imperialist system."

Yes, now the time has come to unite for the new Revolutionary Communist Movement, based in Marxism- Leninism- Maoism. On Comrade Mao's Birthday, we call for defense of Marxism- Leninism- Maoism and the rejection of all types of revisionism, specially Prachanda-Baburam's Neo-revisionism (? it will be better to call them neo-reactionaries ) and the liquidationist approach of RCP, USA.

It is a matter to note that in the name of the 'transitional period', The CPN-Maoist is in the way to make 'good relation' with the Dengist China. The secret and frequently visit of China by Comrade Biplav,  secretary of the CPN- Maoist is its evidence. Even the member of International Department of CPN-Maoist are unknown about his visit to China. Not only this, Comrade Biplav's secret meeting with Baburam Bhattarai, has created a lot of questions and confusions  within the party cadres. To make good relation with Dengists and Baburam Bhattarai the Indian agent, means, to deny Comrade Mao's contributions and to discard the role of Maoism in the Nepalese Revolution.

There are 14 days left to the 7th National Congress. It is a matter of pleasure that after 21 years the National Congress of the Maoist party is going to be held. Near about one thousand representatives will attend the Congress. But, frankly, I would like to express that things are not going in the right direction and the consequences will not take place as we revolutionaries are thinking and hoping. Cadres are very enthusiastic. They are ready for the all types of sacrifice, but the leaders are not competent to address the revolutionary cadre's spirit. What the leaders want is not clear, where they want to move is not clear. They are loaded with bureaucratic mind.

It is the matter to note that, CPN-Maoist activities have proved that they want good relation with Dengist not Maoists. They don’t want to show any relation with the other Maoist Parties and organizations, particularly to those parties and organizations, who are waging People's War.  That’s why, they were passive in the Hamburg Conference too. We all know, Hamburg Conference was organized to support the People's war in India.

Mao is not only the name of a person, and Maoism is not just a terminology, it is the guiding principle of 21st century revolution.

Now, it is the  time to make clear our side. For the liberation of the Nepalese people, for the safeguard of the National Sovereignty' we have to make clear our party line. It is the reality that,  there is one and only one way to march a head, that is waging again the Protracted People's War, going back to the guerrilla warzone and building the new Base Areas.

Let us move forward for the defense of Marxism-Leninism-Maoism.  Let us denounce all types of revisionism –liquidationism  and eclecticism.

Imperialism has no future! The future belongs to communism.

The report by Comrade Rishi Raj Baral gives the impression that the internal document of the Communist Party of Nepal-Maoist for the forthcoming Party Congress is in some way final.

It is to be noted that this is a draft document for internal discussion only and should be respected strictly as coming under the rules of democratic centralism in pre-congress discussion.

Comrade Rishi Raj Baral can present his view on Federal State Structure, China and New Democratic Revolution & any other issues he may think that the document should address and call for Protracted People's War to the Party Congress or he himself can present entirely different paper for discussion in the congress, itsself. The party has safeguarded his rights to present another paper for the discussion. And, it is impressive that comrade Rishi Raj Baral exercise his rights.

The delegates to the Congress will determine the outcome.

The Congress should not be pre judged in the negative way that Comrade Rishi Raj Bara has already done - let us call for respect the universally agreed method of how communists arrive at collective party decisions, democratic centralism.