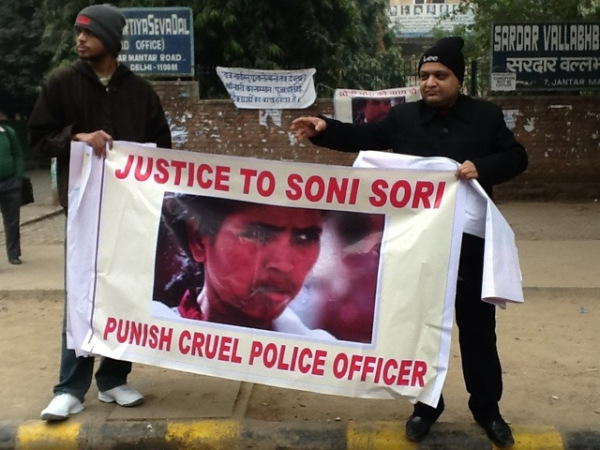 There was a recent gathering at Jantar Mantar to protest against the gruesome sexual violence committed on Soni Sori while in custody in Chhattisgarh under the supervision of Ankit Garg.

Superintendent of Police, Dantewada. Ankit Garg was awarded with a presidential police medal on Republic Day (January 26) in 2012.

Soni Sori’s petition at the Supreme Court is due to be heard .

While politicians from many parties in parliament have demanded fast track courts to deal with the Delhi Gang Rape case, there has been no clear response so far to the demand made by several women’s organisations for fast-track proceedings with regard to the 100,000 cases of sexual assault pending within the judicial system.

Amongst these are numerous cases of sexual assault conducted by members of the Armed Forces, Paramilitary Forces and other Police Forces, especially, but not only in states governed by the draconian Armed Forces (Special Powers) Act.

Soni Sori’s case, where, armed policemen use sexual torture and humiliation on a woman in custody has been repeatedly invoked in demonstrations and gatherings in Delhi to protest against the gang-rape of the 23 year old paramedical student which resulted in her death.

Justice for the unknown citizen can only be done when Soni Sori and many others like her also get justice.