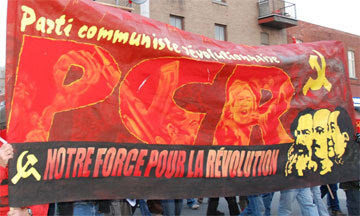 On behalf of the Central Committee and the whole rank and file of the Revolutionary Communist Party (PCR-RCP Canada), please convey our warmest revolutionary greetings to all the comrades who are taking part in the historical 7th National Congress of your Party. Even though we cannot be physically present in Kathmandu, we are still with you in the struggle and want to reaffirm you our full solidarity.

As you mentioned in the kindly invitation you sent us a few days ago, your Congress is a historical one not only because it is going to be held after a long period of over two decades, but also because the decisions you will make will have a crucial impact on the future of the Nepalese revolution —and thus on the world revolution itself.

For a decade, the glorious People’s War that you courageously launched allowed the popular masses of your country to bring powerful blows to the reactionaries and to affirm their national independence. The overthrow of Gyanendra and of the feudal monarchy confirmed once again that “the people alone are the motive force in the making of world history” and that the masses are capable of great things when a Marxist-Leninist-Maoist vanguard party leads them.

The People’s War led by your Party belied the world bourgeoisie who was claiming not so long ago (in fact, at the time you held your last Congress) that “the history has ended” and capitalism had finally triumphed over the aspiration of the masses for communism and revolution. It inspired and it continues to inspire the revolutionary masses in South Asia and around the world, and especially the younger generations that are turning to communism as the only alternative to the actual crisis of the world capitalist system.

The experience of your Party over the last 20 years also showed the power and superiority of Marxism-Leninism-Maoism. It especially demonstrated that the best way to defend and develop MLM, and especially to make it a real force for revolutionary change, is to apply it in practice —with all the difficulties this creates but at the same time all the hope it generates.

From 1996, when we were still a pre-party organization, we supported the proletariat and the revolutionary masses of Nepal and their vanguard Party. We are especially proud to have participated in the First International Road Building Brigade in autumn 2005 in the Rolpa district. The experience of the People’s War in Nepal became an important part of our decision to undertake a unity-struggle-unity process with the Revolutionary Internationalist Movement (RIM), which we have unfortunately been unable to complete before the demise of that organization.

In spring 2007, shortly after the founding of our Party, we wrote that the People’s War in Nepal was “the most advanced revolutionary experience of the last 10 years for the international proletariat.” You’ve already written the first pages of the history of revolutions of the 21st century.

It is now up to all revolutionary communists —wherever we are— to advance on the path you have drawn and solve the practical problems that necessarily arise in front of those who are concretely fighting for our communist future to triumph. There is no doubt for us that your party will continue to play an invaluable role in that process.