Kasama to CPN-M: New beginnings on the communist road 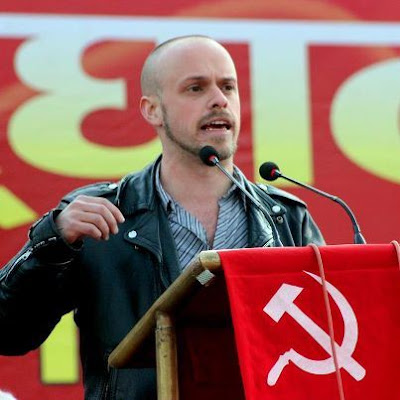 Kasama to CPN-M: New beginnings on the communist road

Liam Wright, participant in the Kasama project, speaking at the opening of the national congress of Communist Party of Nepal-Maoist (more photos to come)

The following letter was shared by some participants in Kasama with the Communist Party of Nepal-Maoist at the start of their recent national congress.

This meeting represented a regroupment of revolutionary forces who were previously part of the Unified Communist Party of Nepal (Maoist) — and who are straining to retake the revolutionary road.

From Participants in the Kasama Project

We would like offer our sincere thanks to the people of Nepal and to the Communists of Nepal for their great contributions to the world, to the cause of collective emancipation.

The revolution in Nepal has, from the onset of the people's war, has had a massive impact. It gave cause for the hopes and dreams of millions of the oppressed to take flight. It touched on the deeply felt need of millions of Nepalese people for liberation and an end to the old, well known poverty and isolation. The revolution here has brought hope to millions the world over who feared it may have become impossible to imagine revolution in today's world. It has profoundly stirred the whole of the South Asian continent — which is vital for our hopes of world revolution.

Your recent difficult period – with your fight against the capitalist road and its representatives in your own party – a welcome and much needed step.

For Maoists, it is no surprise to discover that there is two line struggle in great communist parties, or that the niceties of (what Mao called) "sugar-coated bullets" can corrupt some people, or that powerful forces can emerge who want to dismantle peoples power and the peoples armed forces. This is the nature of a revolutionary process. But what cannot be assumed is that people will take it up on themselves to oppose that, with the determination to form a new communist core.

Your fight against the capitalist road is extremely important for Nepal's people – but also for all of us watching around the world.

Mao famously said "Only socialism can save China."

And yet there were those who after defeating feudalism and making revolution against imperialist occupiers wanted to take that capitalist road – dreaming only of modernization, development and integration into the world imperialist market – and denying that integration on capitalist terms would lead the people to vicious new exploitation, plunder of resources, foreign domination, the horrors of the sex trade, and the deep betrayal of the martyrs who fought for liberation.

We in the Kasama Project and communists in the United States have also had to start over. In the US the previous communist movement is exhausted, with little if any life left — politically or theoretically. That well is dry.

We are regrouping ourselves, and hoping to do so on a new, and more creative level — understanding our own history and the very different conditions which face us.

In this we are looking to learning from many forces around the world who are starting over, creatively-who are also making assessments and new analysis.

It is our view in Kasama that revolution in the United States is both possible and necessary. Even in the heart of empire. And we have argued this fiercely.

In our situation the communist project must be re-discovered and creatively transformed by a new generation of revolutionaries. The radical essence of Maoism, of liberatory communism, must be developed, transformed, and fused with the people.

The communist theory of previous generations must be studied critically, and tested independently. Communist understandings from the past must be defended and popularized, but also developed in new ways. And our resulting communist synthesis will involve the transformation that must come with fusing with the most radical sections of the people. We can't take our communist intellectual legacy as a fixed doctrine or closed orthodoxy – the Maoist movement over the last three decades since Mao, has not been particularly creative and innovative in its thinking. And we need to understand that there is an ongoing need for for ongoing creative rupture, not just for continuity in our theory.

In this regard we have taken some beginning, but important steps.

We have utilized the new digital means to create a 21st century communist press — what we call an Iskra project — for debate and training among communists. We are developing early organizing collectives and projects in cities across the United States. We are working, carefully and deliberately to regroup and develop toward new disciplined organization, analysis, and strategy.

And we are reached out to work with young new revolutionary circles that are forming, to develop connections, common work, and perhaps deepening unity.

Kasama also leapt into the recent Occupy Wall Street movement which involved hundreds of thousands in the most radical and sustained mass disturbances in the US in recent times.

We contributed to that movement by helping to found and edit the Occupied Wall Street Journal, a leading newspaper within the Occupy movement which reached hundreds of thousands.

Many Kasama supporters went into the Occupy movement as activists and organizers, leading through line at the general assemblies, helping to radicalize the movement and help it flourish, to go as far as it could…

Now some of our Kasama supporters, and some of our allies have been hit with legal charges which could put people in jail for months or years. Political police have been unleashed across the country, in large numbers to gather evidence on radicals, anarchists and revolutionary communists, and to try to blackmail people into becoming informants for the police.

In Kasama we have also made a serious priority out of our international solidarity through spreading the word about, politically defending, and learning from revolutions in South Asia and popular uprisings around the globe. We particularly oppose the intrigues of U.S. imperialism — its murderous agents, its wars and threats of wars, its awful bribes intended corrupt leaders into betraying the people.

Revolutionary possibilities in the U.S.

In the U.S., revolution is possible because of deep contradictions woven through the very fabric of US society. Even with the relative wealth of US society millions live in poverty, in prison, or under the gun of the police. The US is a deeply stratified society, with many oppressed nations under one state, with one multi-national working class and one imperialist bourgeoisie.

There are unresolved fautlines of potential struggle with revolutionary potential.

The historic oppression of African American people. In 1968 Mao Zedong made a crucial, historic analysis of the nature of revolutionary struggle in the U.S.:

"The struggle of the black people in the United States is bound to merge with the American workers' movement, and this will eventually end the criminal rule of the U.S. monopoly capitalist class."

The Black nation in the United States remains in a deeply oppressed condition, and African American liberation is a central reason and focus for any liberatory revolution in the US.

Immigrants are driven into the U.S. from all over the world because of the desperate poverty caused by imperialism. This abuse has given rise to an explosive faultline because tens of millions are kept in a illegal status – as an invisible, state-terrorized lower level of the working class.

It is our view that a united front for revolution in the U.S. will likely have at its core a strategic alliance of the movement for socialism arising from the multiracial working class, with the national liberation of oppressed peoples within the U.S..

The U.S. may have granted legal equality and developed an acceptance of love relations – but large sections of women in the U.S. experience rape in their lives. Advanced development and bourgeois democracy to not produce liberation. As a result: there is a powerful opposition to traditional sex roles and continuing inequality.. There is great anger over fascist legal attempts to suppress women's rights to birth control and abortion. Gay, lesbian and transgendered people face continued oppression – including the murderous violence of bashing, and the ugly bigotry of the rightwing religious conservatives.

We communists, in Kasama, embrace the view that final revolutionary victory in our epoch is a world victory: We either all get to communism or none of us do. We are internationalists.

Kasama has worked hard to popularize the great revolutionary struggles in Nepal and India – in all their complexity.

And revolutionaries in the U.S. have a particular responsibility to oppose U.S. imperialism and to support those, around the world, who rise up against it. The growth of revolutionary movements in the U.S.] have always been linked to struggles of the oppressed in other parts of the world, whether they were the inspiring anti-colonial struggles of Africa, the Vietnam war,] the Great Proletarian Cultural Revolution or the more recent Arab Spring.

Again: The United States appears to be at the heart of modernization and development. Yet there are oppressed classes of tens of million who suffer bitterly here– and their suffering has worsened.

That means the system dominating the United States is outdated and can be overthrown.

The challenging thing, we believe, is how to start over. We have the task of going forward creatively – reconceiving revolutionary strategy based on deep experiences, and regrouping communist forces based on the awakening of new generations and the departure of the old.

We wish you well in the vital process of finding your footing and your road under these new conditions. We look forward to learning from what you decide and what you do.

We are confident that the people of Nepal, South Asia, and the world as a whole don't want a future defined by sweatshops, imperialist killer drones, deathsquads, caste systems, and the continuing exploitation of the billions of people who labor and create.

The first steps toward a communist world of liberation is becoming possible, and our challenge is fusing communist ideas and organization with the vast numbers of our sisters and brothers who will make that possible.
Posted by nickglais on 1/13/2013 12:03:00 PM