US imperialist policies will continue under Obama regime 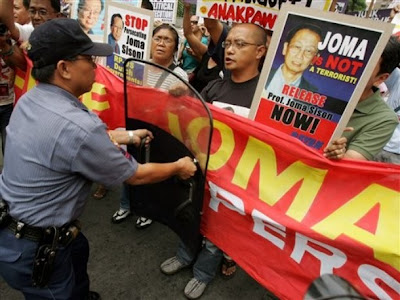 Statement of the Communist Party of the Philippines

Barack Obama's victory in the US presidential elections reflects the American people's overwhelming rejection of the militarist and neoconservative Bush regime. Obama, who ran under the Democratic Party, presented himself purportedly as an antithesis of the Republican George W. Bush. He took advantage of the current intense and widespread disenchantment of the American people, especially in the face of the US political and military disasters in Iraq and Afghanistan and the worst economic crisis in the US since the Great Depression.

Imperialism' s continuing policies of global hegemonism, plunder and war, however, blur the line of demarcation between Democrats and Republicans- -between Obama and Bush--and show that they simply represent two factions of the US monopoly bourgeoisie. The current deepening recession and desperation in the US and the world capitalist system is pushing the US to intensify imperialist exploitation, plunder and oppression in its home country and its semicolonies, covet more areas for expansion and wage wars of counter-revolution and aggression.

The US will continue to expand its military-industrial complex, flex its military muscle and wage big and small wars in order to pursue its hegemonism, prevent rivals from carving up its vast empire, and seize new markets and territories for greater imperialist plunder and clout. The escalation of US imperialist aggression is a matter of fact, especially in the face of the global economic crisis.

Obama will only serve as US imperialism' s new lead instrument for all this. Shrouded in his Democratic Party and populist rhetoric, US hegemonism and aggressiveness only becomes more devious. This is not unprecedented, even among US rulers from the Democratic Party. The populist US president John F. Kennedy launched the Bay of Pigs invasion of Cuba in 1961. He and his successor Lyndon B. Johnson escalated the Vietnam war throughout the 1960s. "New Deal" president Franklin Delano Roosevelt employed World War II to revive the US economy from the Great Depression.

Obama has repeatedly vouched for the Bush-initiated war of terror and is actively gathering support for continued US military interventionism especially in the oil-rich regions of the Middle East, Central and Southeast Asia. He has specifically advocated sending an additional 10,000 troops to Afghanistan and carrying out unilateral strikes at its borders with Pakistan, on the pretext of going after the al-Qaeda. While calling for the eventual withdrawal of American troops in Iraq, he has also made clear that the US will continue to exert its military presence there in order to ensure that the puppet Iraqi government will carry out US dictates.

Last June, Obama also advocated continuing military intervention in the Philippines saying that he will support the Balikatan military exercises in line with the "friendship" between the US and its neocolonial client state. He has completely disregarded the fact that the Balikatan is used to camouflage the building up of permanent US military presence and interventionism in the country in outright violation of Philippine sovereignty. He has called for the further expansion of programs to supply weapons to the Philippine military, in utter disdain of the several hundreds of thousands victimized by the Arroyo regime's Oplan Bantay Laya being waged under the tutelege and support of the US military.

The Communist Party of the Philippines (CPP) urges the Filipino people, as well as the American people, and the people in the semicolonies of the US and other countries fighting for national liberation and democracy not to allow themselves to be beguiled by the deceptions of the newly elected American president. The CPP is confident that the working class and people of the world will persist with resoluteness in their struggle against imperialism and reaction, and for the attainment of national and social liberation, democracy and progress.