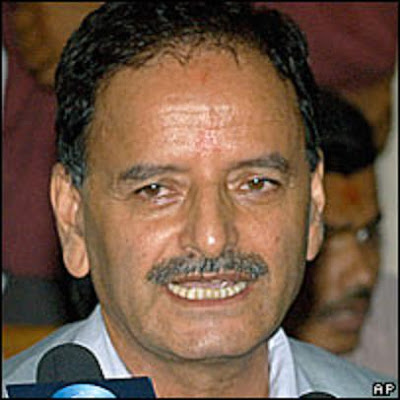 Continuing with his party's official line, Nepali congress leader Krishna Prasad Sitaula on Wednesday said that Maoist combatants shouldn't be integrated into Nepal Army (NA) under any circumstances, warning that the country may face grave risk if something like that is done

Speaking at a 'tea-party' organised by NC's youth wing Tarun Dal in Kalaiya of Bara district, the former home minister who was one of the peace negotiators during the NC-led interim government, talked against attempts to induct the politically indoctrinated army of a party into NA.

He also blamed the government of increasingly growing irresponsible towards its duties, and cited example to its apathy towards it main task of establishing sustainable peace and drafting a new constitution.

Sitaula is in a whirl-wind visit of Terai districts on "National Awareness Campaign for Peace, Democracy and Formation of new constitution" organized by his party.
Posted by nickglais on 11/12/2008 06:11:00 AM