Fierce Debate by the Fierce One - Prachanda on Democratic Republic 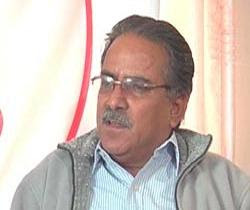 After the meeting between party chairman and prime minister Prachanda’ and his former mentor and senior party ideologue of Maoists Mohan Baidya ‘Kiran’ failed to produce any understanding, Tuesday, the central committee meeting of the party resuming from Wednesday is expected to witness stormy debate between the two camps.

Both Prachanda and Kiran have registered separate political report at the meeting, which started on Monday.

This is said to be the first time that party chairman Prachanda has faced such a serious challenge over his leadership from within his party.

The central committee meeting is taking place ahead of National Cadres’ Conference slated to begin from Thursday. The conference is expected to finalise the party’s strategy in current situation