Cadres at Kharipati in Bhaktapur debate future of Nepalese Revolution 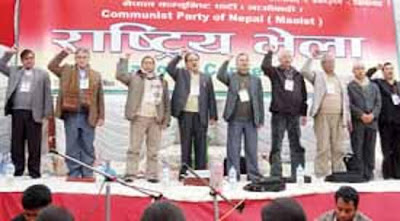 Around 1,100 senior party cadres have assembled at Kharipati in Bhaktapur to discuss two rival political documents prepared by Prachanda and Mohan Baidya ‘Kiran’.The meet will continue for three days, according to the coordinator of the event Hitman Shakya ‘Suman’.

During his inaugural speech, which was open to the media, Prachanda dwelt on mostly on emphasising party unity and ideological clarity, hinting that the party was passing through an ideological debate.He said reactionary elements had tried their best to divide the party during the People’s War.“They had even tried to create fissures among us during the peace process,” he said. “But they failed to divide us.

Their political calculations also failed after we emerged the largest party following the CA polls.”He warned the reactionaries within the country and outside not to dream of creating any political and ideological division in the party.“We sailed through such crises ever since we waged the People’s War,” he said. “It’s not easy to divide a party that has created a strong base among the people.”

Prachanda also said his party was capable of managing “ideological crisis” and taking only calculated “politicalrisks” to move forward in a united manner.He said the whole world and people of Nepal were keenly watching as to what sort of political and ideological course the party would adopt. The people are hopeful that the party would remain intact and take the right direction to lead the nation towards prosperity and stability.“Ours is the only party of which the people have high expectations,” he said.
Posted by nickglais on 11/21/2008 12:06:00 PM