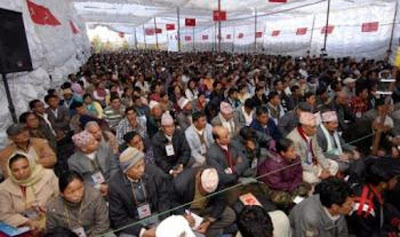 The six-day long national cadres' conference of the CPN (Maoist) held at Kharipati of Bhaktapur ended Wednesday evening, adopting new strategy which, according to party leaders, is a 'synthesis' of separate policy documents presented by Prachanda and organisation department chief Mohan Baidya (Kiran).

Talking to reporters after the conclusion of the national conference, party spokesperson Krishna Bahadur Mahara said the conference has adopted a slogan 'people's federal democratic national republic', which pretty much sums up the immediate strategy of the party. 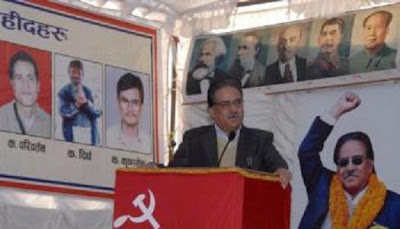 The national conference adopted the strategy after intense brainstorming over the documents of Prachanda and Baidya( Kiran), Mahara informed claiming that the decisions taken at the conference "have brought party unity to a new height".

During the group-wise debate, the cadres gave a clear thumps-up to Prachanda's document, but suggested that leadership come up with a single document by merging the two. Owing to their pressure and to avert looming leadership crisis the party stalwarts had agreed to merge the two proposals.

1200 senior party workers including People's Liberation Army commanders had participated in the national conference.
Posted by nickglais on 11/26/2008 09:26:00 AM