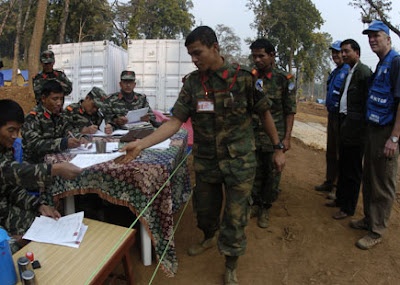 At a time when the issue of army integration is drawing flak from many quarters including the main opposition Nepali Congress, Deputy Prime Minister and Home Minister Bam Dev Gautam on Monday defended the government's plans to go ahead with integration of Maoist combatants into Nepal Army.

In a sharp rebuttal to fears expressed by NC leaders that plans are afoot to make PLA commander the next army chief, Gautam, who heads the army integration special committee, said there's no reason why a Maoist People's Liberation Army (PLA) commander can't become the Nepal Army (NA) chief after the army integration takes place.

Minister Gautam said that in fact any member of the PLA can become the army chief after the Maoist combatant merger with NA, provided that they are capable and meet all the criteria for the post.

"If [Maoist chief] Prachanda can become prime-minister, there's no question why a Maoist commander can't become army chief," he said while talking to reporters at a programme in Chitwan

He also informed that the government would make separate arrangement for those Maoist combatants who don't meet the criteria for military services. However, he said save for Maoist combatants no other member of the armed outfits [operating in the country] can be integrated into Nepal Army.
Posted by nickglais on 11/17/2008 06:15:00 AM