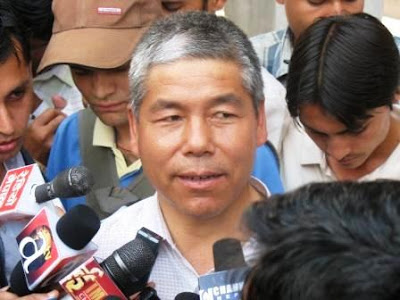 Minister for Law and Constituent Assembly Dev Gurung on Wednesday suggested amendment of the interim constitution so that a referendum could be held to settle the issue of army integration which has been subject of dispute in the national political scene lately.

Speaking to reporters at Pokhara airport where he arrived after finishing a 4-day visit of his home district Manang, Minister Gurung stated that nowhere in the interim constitution has it been mentioned that a referendum would be conducted for integration of Maoist combatants into Nepal Army (NA).

So the interim constitution can be amended so that referendum can be used as the "ultimate weapon", the Maoist minister added.

He said that NC should be assured of a place in the Army Integration Special Committee (AISC), but at the same time made it clear that the army integration process would go ahead even if there is no participation of the party in it.

NC has been saying that AISC was unilaterally formed by the Maoists without any consultation with other parties and have demanded that it be dismantled as the Terms of Reference (ToR) for it is against the past pacts and understanding reached on army integration.

CPN (UML) has also criticised NC of trying to shy away from its responsibilities by not agreeing to participate in the AISC, even though it agrees that ToR violates pacts on army integration
Posted by nickglais on 11/05/2008 08:42:00 AM