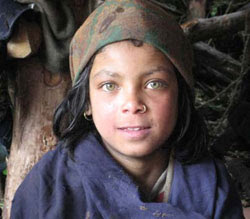 Today I visited Patan, the ancient town adjoining Kathmandu, to look at the sights. By the temples I was approached by two girls, selling bags, who talked to me about the significance of the different buildings. They seemed to know a lot about the temples so I asked them to be my guides.

One girl is a Hindu aged 15 and the other a fourteen year old Christian. The children here look to Western eyes a lot younger than they really are because a poor diet limits their growth. These two looked more like ten to eleven year olds to me. They were cleanly and attractively dressed. Both are living independently. In the first case her mother died and her father remarried but she was badly treated because her father is an alcoholic. So she left home. The younger one’s father is very old and is unable to look after her. She was living in Terai with her mother but some armed bandits came and demanded possession of their house. Her mother resisted and was shot dead. Then her daughter came to Kathmandu.


Both girls spoke good English which they had picked up from tourists and one knew some Spanish (more than I do!). However, their reading and writing is limited. They would like to go to school but even at the state schools fees must be paid. They cannot afford the fees because they have to spend their time earning money on the streets. (The new Maoist-led government is abolishing school fees up to the eighth grade but it is too late for them.) They do spend some time learning to paint religious Thanka art because the tuition is free. Both rent a room for which they pay 1,500 rupees a month rent (about 14 pounds sterling). Most of the time they manage to earn enough to pay rent and buy food but sometimes they go hungry.

I asked them about how they saw their futures. Would they get married and have children? Both were emphatic that they would not marry nor have children. They explained that they saw husbands, often drunk, treating their wives badly and they did not want to be confined to the home looking after a succession of young children. They hoped to find regular jobs and live independent lives. I said to them, “You are feminists”, but it is a word they did not know. I explained to them what it meant and they concurred. Although they look like little children, these girls are in fact mature women.

Nepal is one of the world’s poorest countries and child poverty is particularly bad. The streets of Kathmandu are teeming with urchins begging and hustling. Yet there is a very positive side to these children. Compared with their Western counterparts – being driven to and from school by parents, etc. – these children have had to learn to be resourceful and self-assured. In terms of the university of life they are way ahead of children in the imperialist countries.

Given the right conditions and opportunities these children could constitute an immense creative resource for building a better life for the people of Nepal. In trying to improve the lot of children I hope that the new government does not simply copy the standard Western model of education but develops something new and different which learns from and builds upon the knowledge and skills that the children acquire in the course of their struggle to stay alive
Posted by nickglais on 11/03/2008 08:52:00 AM