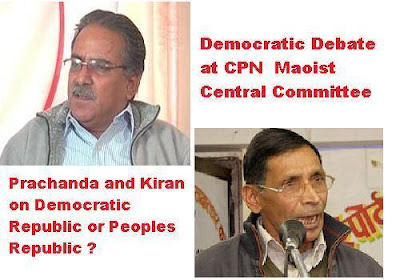 NEPAL: Kiran counters Prachanda with his own document at Maoist central committee meeting

Party chairman and prime minister Prachanda as well as senior party leader of Maoists, Mohan Baidya 'Kiran' have registered two separate documents for discussion at the central committee meeting that began in Bhaktapur on Monday.

The two documents have been registered at a time when reports of rival factions jockeying for their own version of democratic republic and people's republic have been doing rounds.

Party spokesperson and Minister for Information Krishna Bahadur Mahara has said discussions over them will start from Wednesday.

Earlier the faction led by Kiran had been sounding out that they would register a different document if Prachanda's document is not to their liking.

Talking to reporters after he emerged out of the meeting, PM Prachanda said, "I have just registered my political report. On the nature of republic, (I have forwarded models of) parliamentary democracy, people's republic and transitional republic.

The different documents have been registered ahead of crucial National Conference of Party Cadres of the Maoists.

Earlier, the central committee meeting had gotten underway to decide on key issues including army integration and whether to implement the agenda of People's Republic which has drawn intense criticism from many political parties including the main opposition party Nepali Congress.

The future course of action of the party, proposals to be tabled at the National Cadres Conference of the party and the current political situation are some of the things currently will be discussed in the meet, it has been learnt.

The meeting will prepare agenda for the Conference of the party and make necessary preparation to hold the conference set to start in few days time.

Sources also say that Finance Minister Baburam Bhattarai is preparing a third draft that would work as a compromise between the two groups within the party.
Posted by nickglais on 11/18/2008 08:20:00 AM