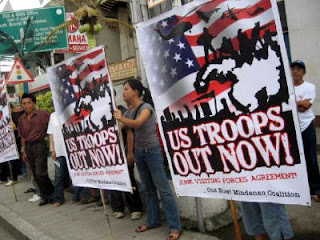 The Communist Party of the Philippines (CPP) warned that the constant presence of US naval warships and armed American troops in the Philippines may drag the country to military tensions in the Korean pensinsula and a possible US-led war of aggression against the people and government of the Democratic People's Republic of Korea (DPRK) and called for an immediate end to the "all-out access policy" of allowing US-led foreign troops unrestricted intrusion to Philippine territory.

Over the past several weeks, the government of the DPRK has been issuing bellicose threats after the US flew at least two nuclear-capable B-2 stealth bombers over the Korean peninsula in a show of force against North Korea. The US has heightened economic sanctions in the vain hope of making the DPRK kneel before its imperial power.

Last March 30, the DPRK government declared that it was in a "state of war" with South Korea after putting an end to the truce agreement forged in 1953 and has subsequently cut communication lines.


"The Filipino people and their revolutionary forces denounce the US imperialists for further intensifying the tension in the Korean peninsula by making threatening fly-bys of its nuclear-capable bombers and building up its military strength near the DPRK," said the CPP.


Yesterday, the US military deployed another naval warship in the Korean peninsula. The USS Decatur, a guided-missile destroyer, sailed into the area in addition to the USS John McCain.

There are close to 30,000 American soldiers in South Korea which hosts at least 20 US military bases and facilities. The US also maintains around 50,000 troops in Japan which hosts US Pacific Command's military base.
Posted by nickglais on 4/03/2013 04:20:00 PM