The Battle of Mynydd Hyddgen is considered the first victory in the field won by Owain Glyndŵr (1359–c. 1416), leader of the Welsh revolt and it could be said that it set the tone for the spread of the rebellion in its early stages and at a key time if the rebellion was to gather meaningful momentum.

The battle began when English settlers of Pembrokeshire and settlers of Flemish descent (who had also settled in Pembrokeshire, encouraged by the earlier English King Henry I of England), attacked the small army of Glyndŵr, which was encamped at the bottom of the Hyddgen Valley. 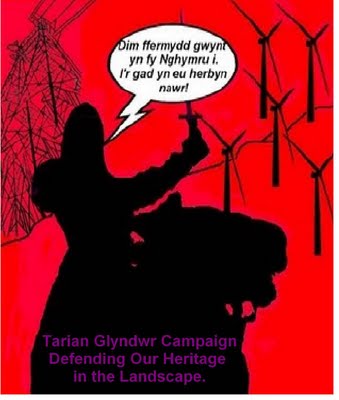 Democracy and Class Struggle says we must stop this reckless destruction of Welsh Battle sites, if these were English victories they would be protected and celebrated but Welsh victories are erased from memory and history - reclaim the Land of our Fathers their victories were our victories.
Posted by nickglais on 4/08/2013 03:20:00 PM