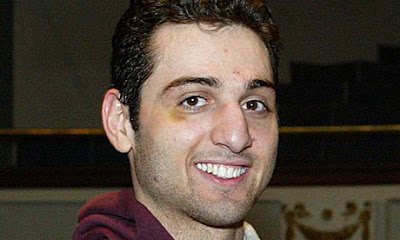 There are gaping holes in the official story of the Boston bombings.

We are asked to believe that Tamerlan Tsarnaev was identified by the Russian government as an extremist Dagestani or Chechen Islamist terrorist, and they were so concerned about it that in late 2010 they asked the US government to take action. At that time, the US and Russia did not normally have a security cooperation relationship over the Caucasus, particularly following the Russian invasion of Georgia in 2008. For the Russians to ask the Americans for assistance, Tsarnaev must have been high on their list of worries.

In early 2011 the FBI interview Tsarnaev and trawl his papers and computers but apparently – remarkably for somebody allegedly radicalised by internet – the habitually paranoid FBI find nothing of concern.

So far, so weird. But now this gets utterly incredible. In 2012 Tamerlan Tsarnaev, who is of such concern to Russian security, is able to fly to Russia and pass through the airport security checks of the world’s most thoroughly and brutally efficient security services without being picked up. He is then able to proceed to Dagestan – right at the heart of the world’s heaviest military occupation and the world’s most far reaching secret police surveillance – again without being intercepted, and he is able there to go through some form of terror training or further Islamist indoctrination. He then flies out again without any intervention by the Russian security services.

That is the official story and I have no doubt it did not happen. I know Russia and I know the Russian security services. Whatever else they may be, they are extremely well-equipped, experienced and efficient and embedded into a social fabric accustomed to cooperation with their mastery. This scenario is simply impossible in the real world.

We have, by the official account, the involvement of the two Tsarnaev brothers, the FBI and the Russian security services.

The FBI have a massive recent record of running agent provocateur operations to entrap gullible Muslims into terrorism. The Russian security services have form on false flag Chechen bombings.

Where the truth lies may be difficult to dig out. But the above official version is not true.

Craig Murray is an author, broadcaster and human rights activist. He was British Ambassador to Uzbekistan from August 2002 to October 2004 and Rector of the University of Dundee from 2007 to 2010