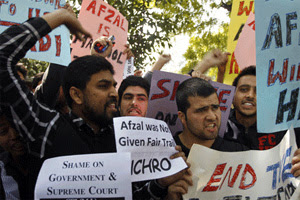 Activists of mass movements, nationality struggles and revolutionaries are not terrorists,

the Indian State itself is the biggest terrorist!
The Indian State which boasts itself as world’s biggest democracy has executed Afzal Guru on February 9, 2013 in Tihar jail of Delhi in a most clandestine manner. Afzal Guru, who was arrested on the charges of abetting the attack of December 13, 2001 on Indian parliament, was not given any opportunity to prove his innocence and even he was denied from deputing a lawyer of his choice. The supreme court of India confirmed death penalty to him in 2005 to ‘satisfy the nation’s collective conscience.’ Without conducting any impartial enquiry of who might be the real actors behind that attack and what might be the real conspiracy, activists and sympathizers of Kashmiri nationality struggle were deviously framed in this case.

As part of the ‘global war on terror’ unleashed by the US imperialists after 9/11 attacks, the Indian State launched a massive propaganda campaign through the corporate media depicting the nationality organizations and revolutionary organizations as terrorist ones. To systematically divert the people’s attention from their immediate and genuine problems, it has been propagating that the ‘terrorism’ is the lone biggest problem of all. In Kashmir and in all states of India, Muslim population in general are in a state of great agony for the fascistic massacres, atrocities, tortures, jail custodies and inhuman discrimination inflicted on them by both Congress and BJP governments and various Hindu religious fanatic forces belonging to the Sangh (RSS) gang.  Some Muslims are resisting this in their own ways. As one of the forms of this resistance, at times, some unwanted destructive acts have also been taking place. The ruling classes and the Hindu religious chauvinist forces only are responsible for this. At the same time, intelligence wings of Indian government and the US and the groups connected to the Hindu fundamentalist Sangh gang have been perpetrating bomb blasts and other disruptive actions in various places of the country in a deceitful way.  The government and the media which stands hand in glove with it are portraying the innocent Muslims and nationality organizations as responsible for all of these attacks. They are being falsely framed under fake charges. Indian State’s mission is to suppress every just mass movement using this as a pretext. The dramatic attack on parliament was nothing but a part of this conspiracy.

The Congress-led UPA government which till now has been postponing the execution of Afzal Guru, now hastily took this decision so as to gain upper hand over BJP and to prove itself as champion over ‘terrorism’. In this process it has violated many a legal norms. It didn’t give prior information to Afzal’s family that the President of India had rejected his mercy petition. And he was not allowed to meet his family members before his death. After imposing curfew in entire Kashmir valley, the Indian government has resorted to this cowardly act. By not giving even his dead body to the family members – just as world’s biggest terrorist US imperialism did by throwing the body of Osama into the ocean – it has inhumanely cremated his body in the jail premises.

By executing Afzal Guru, the Indian government has hurt the conscience of not only Kashmiris, but entire democracy-loving Indian masses. It’s a fact that even after butchering of over 80 thousand Kashmiris and turning entire valley into a military cantonment with the deployment of over 700 thousands of armed forces in Kashmir, the national aspirations of Kashimiri people have not been suppressed. Government of India is daydreaming that by stringing up Afzal Guru the fighting spirit of the Kashmiri people could be curbed down. Over many decades, the people of Kashmir are justly fighting for the national liberation and azadi. Despite of many ups and downs, their struggle has been marching ahead in various forms and at times it’s been erupting like volcano. This kind of callous acts of Indian fascist rulers will only add salt to the wounds of Kashmiri people, but cannot suppress them forever.

Communist Party of India (Maoist) condemns this fascistic act in severest terms. It warns the ruling classes that their hope of suppressing people’s movements and nationality struggles by committing such acts will definitely be faded away.  Kashmir belongs to Kashmiri people only. Neither India nor Pakistan has any right over it. Our Party fully supports the liberation movement of the Kashmiri nationality. We call upon the workers, peasants, students, youths, dalits, adivasis, religious minorities, women, traders…. entire oppressed masses and nationalities to fight against the big comprador bureaucratic bourgeois and feudal ruling classes and their imperialist masters who had turned this country into prison house of nationalities. Only by marching ahead hand in hand with the ongoing struggle aimed at building of People’s New Democratic State – which would be the united front of workers, peasantry, small and national bourgeoisie – can the nationalities achieve the right of self determination including the right to secede and can the entire oppressed people achieve liberation from all kinds of exploitation and suppression.