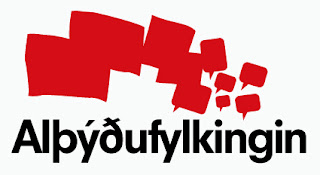 1. Briefly describe your party’s general agenda in one sentence.

We want socialisation in the country’s infrastructure, not the least in the financial sector, making it a public good run not for private profit, but for the benefit of society.

2. Tell us about your party. What’s it all about? Does it have a history? Are you proud of that history?

The People’s Front of Iceland is a very young party, formed only a couple of months ago. However, it resonates with a long and rich heritage of socialist or anti-capitalist popular front movements with a radical, reformist agenda, meaning not just mending isolated ills of capitalism, but reforming society away from capitalism.

3. Is there a foreign sister party that you identify with, one that international readers might identify with?

Not really—not specifically, just this global socialist, anti-capitalistic, anti-opportunistic movement in general, the part of it that wants to use social means to solve the problems capitalism has created for us. The idea is not just to give out more benefits for the victims, but also to stop the financial juggernauts that are grinding down our societies—by replacing them with socially responsible financial institutions.

Apart from the socialisation of financial operations, we vehemently oppose joining the European Union. In the EU, capitalism and markets are the law, nay, are the constitution and thus would be imposed on us with unprecedented force if we joined it. We need to guard our sovereignty, because we need to use it to mould our society in the form we want it to have, we need to be able to help each other out as a society and thus we need to be free from the domination of capital.

5. What do you admire about the current coalition government and what it accomplished in the last four years? What do you dislike? What will you do better?

For a bourgeois government, I guess it has done many things alright, especially things that hardly cost the elite a penny. However, it is still a bourgeois government and has defended basic interests of the bourgeoisie without any consideration to the greater interest of society. The mixture of Blairite social democracy and opportunistic pseudo-left-green coalition has not only practiced capitalistic economics, it has done so under a leftist veil.

Its submission to the International Monetary Fund speaks volumes thereof, as does the bailing-out of financial institutions, the cuts in health and welfare, the application to join the EU and the continued policy of heavy industry. I admit, they’ve held the conservatives at bay—but what for? To run capitalism better themselves? We would make it our first priority to end negotiations with the EU, tell “advisors” from the IMF to beat it and to start socializing the financial institutions.

6. Was the financial crisis in 2008 and the problems Iceland now faces in some way caused by government policy and action or the lack thereof? Is your party in some way responsible for this? Why or why not?

I must admit that I, personally, am somewhat responsible for the crisis. Long before it hit us, I knew as a socialist that capitalism was unsustainable and that it has a crisis built into it. This I knew, but I did not do all I possibly could have done to stage a revolution. This is my responsibility and it follows that I will not be co-dependent with capitalism, but will do my utmost to replace it with a society of equality and social justice. As for government policy before the crisis, it didn’t directly cause the crisis, but they made it probably a hundred times worse by endorsing the real-estate bubble, by overheating the economy with gargantuan construction projects and by selling the banks to swindlers and usurpers.

7. Specifically, how do you plan to bring Iceland back to economic prosperity?

A socialized financial sector will provide cheap and safe financial services to people and companies in reasonable amounts, so that a family can buy a normal home without having to pay for it many times over, and a company can finance its operations at very favourable interest rates. That way, high interests should stop pressing prices up and the economy can grow in a healthy, steady way. We already live in a society of material abundance; what we lack is first and foremost equality. Growth is beneficial only as far as society is equal. When less interest needs to be paid, there is also less pressure for GDP growth. So our priority is equality, not GDP growth.

8. Do you want to weaken, strengthen or keep unchanged the regulation of the financial industry and other business activity in Iceland?

Strengthen it, and change it in a fundamental way by making it a social service for the benefit of society, not vice versa.

9. Do you plan to increase or decrease the total tax burden in Iceland?

Relieving the public of endless interest payments would greatly decrease the de facto taxes that we pay to the financial institutions, both as individuals and as a nation! We would decrease VAT on many basic goods and services, as well as other taxes on people at the lower end of the wage spectrum, but probably increase taxes on the richest—seriously, who needs five million ISK a month?

10. Do you believe in the Icelandic króna? Or will you work to adopt an alternative currency? If so, which one?

The problem with the króna is that every other króna is stolen from us. No foreign currency would suit us better than the króna (i.e. because of the law of optimum currency area) so we will stick with the króna, and fundamentally reform its economic foundations.

11. Do you support the newly passed law removing an expiration date from Iceland’s capital controls? Will your party work to lift these controls? Does it have a timeframe in mind?

At the moment, and in the foreseeable future, the alternative to capital controls would be economic ruin—and we have plenty of that already. So, no, we would not work to lift them. Also, in general we oppose foreign investment, as we see it as sucking value out of the economy.

12. Do you believe that the collapse was more than an economic one? If so, what else failed in 2008 and does it still need fixing?

Well, primarily it was an economic one, but it also unveiled gross political mismanagement and corruption—and of course the inability of the Icelandic system to deal with a bloated financial system.

13. How can the government best serve Icelandic homes?

By establishing a socialised financial system and disconnecting the index regulation from real estate loans. Oh, and by strengthening our means to fight domestic violence and the neglect of children.

14. What is your stance on Iceland’s application to the European Union? Do you ultimately think Icelanders' interests would be best served by being part of this coalition?

15. What is your stance on the new constitution that was called for in the wake of Iceland’s financial crisis? Are you for or against pushing the current draft through parliament? Why or why not?

The party is neither for nor against the new constitution. I think it’s safe to say that most of our candidates think it’s not sufficient, but still much better than the old constitution and would thus support it.

16. Will your party do something to protect the land and its resources? Is a more stringent regulative framework needed to ensure conservation of the environment?

The land and its resources should meet the needs of people, not the greed of capital, and they should be managed in a sustainable way. We would hesitate to let the oil industry extract oil from our seabed and we would immediately end current plans of connecting Iceland and Scotland with a cable for transporting and selling electricity. We would also continue what the current government has already started, to strengthen public transport and resurrect marine shipping.

17. Is gender equality a problem in Iceland? If so, what does your plan to do to ensure equality?

Yes, it is a problem. We believe that if our wage system becomes more transparent and the control of companies democratic, that would decrease inequality a lot. The resurrection of the healthcare system would also strengthen professional classes that traditionally are mostly comprised of women.

18. Where do you stand on immigration issues?

People should be welcomed as people and not as mere labour power. The state should ensure that all immigrants learn enough Icelandic to be able to read contracts, understand public safety warnings etc., so that they can access the information they need to enjoy their rights and be safe. Also, refugees should be treated with the same dignity as other people.

19. Does your party harbour any ideas about the role of religion in governance?

Well, not really; membership in our party is not conditioned by views on church and state, but I think most of us are for total separation of the two entities.

20. Are there any parties that your party will not work with in a coalition government? Why?

We have not preconditions other than our programme, and any party that agrees to socialisation of the financial sector and rejection of the EU is a possible partner. Naturally, this excludes many parties.