RCPUSA from Post Maoism to Pro Imperialism : Statement by Democracy and Class Struggle 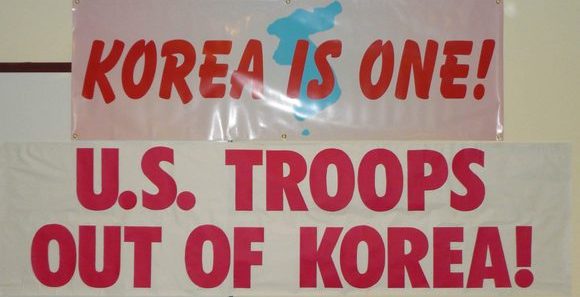 Democracy and Class Struggle on Mao's birthday pointed out that the RCPUSA had rejected Maoism for the Post Maoism of Avakian Thought.

We have also pointed out the bourgeois cosmopolitan outlook of the RCPUSA on the national question, a baggage which Kasama has also inherited.

This latest statement on North Korea takes the RCPUSA from Post Maoism to Pro Imperialism and is a very serious development.

Koreans had to deal with the reality of nuclear weapons for decades , many thousands of Koreans were used as slave labour by the Japanese in World War II and many of these were forced labour workers in Hiroshima and Nagasaki when the U.S. dropped the atomic bomb.

In the U.S. war in Korea, U.S. General MacArthur wanted to drop 50-70 atomic bombs along the China-Korea border to create a belt of land people cannot live on or cross.

The North Koreans are dismissed by the RCPUSA has mere "nationalists"and only world socialist revolution can save mankind( heard that crap before somewhere).

Eveybody is embedded in a nation and rootless cosmopolitanism may appeal to bourgeois anarchists but has nothing in common with socialism or the latest bourgeois socialism "citizen of the world" philosophy of the Bob Avakian of the RCPUSA.

The National Liberation struggle of the Korean people against US Imperialism must be supported, the nature of the North Korean regime and its military first policy is a secondary question to be resolved by the Korean people alone when they achieve unification.

The artful attempt of the RCPUSA to make this the principal question shows how far its ideological regression has proceeded, its subtle use of presenting competing oppressive agenda's US and North Korean is beneath contempt in this life and death anti imperialist struggle.

The RCPUSA obviously dislikes socialist emulation for national honour in Korean enterprises like the Proudhonist Bourgeois Socialists they are.

Whatever the mistakes and weaknesses of the Korean peoples struggle they are eagles in the struggle for independence and anti  imperialist national liberation.

The RCPUSA is but an irritating fly.


Article Below is From RCPUSA

North Korea Is Not a Socialist Society

April 14, 2013 | Revolution Newspaper | revcom.us
The Democratic People’s Republic of Korea (North Korea) calls itself socialist-communist. It is described in the West as a “fanatical” and “pure” communist country. In order to have a full picture of the forces driving the conflict between North Korea and the U.S., it is important to understand what communism is, what socialism is, and what the real nature of North Korean society is.
1. What are real socialism and communism? Communism pivots on what Karl Marx called “the two most radical ruptures”: with traditional property relations and with traditional ideas. The communist revolution is about springing all of society into the air. It is about putting an end to all exploitation and oppression. It is about empowering the masses of people, through the creation of a radically new and different state power, to increasingly take responsibility for running society, to ever more consciously change the world and change themselves—with the goal of creating a world community of humanity, where there are no longer class divisions and social inequalities, no longer social antagonism. The achievement of communism requires visionary vanguard leadership basing itself on a scientific understanding of reality and how society and the world can be transformed in the interests of emancipating all of humanity. This is not North Korea!
2. North Korea is not socialist. Socialism is a new form of political power in which the formerly oppressed and exploited, in alliance with the middle classes and professionals and the great majority of society, rule over society with the leadership of a visionary, vanguard party. And socialism is a new economic system where the resources and productive capacities of society are consciously organized and planned to meet social need, and to overcome the inequalities of capitalist class society. And most fundamentally, socialism is a historical period of transition, between capitalism and communism. (For a fuller explanation of what socialism is all about, see “Everything You’ve Been Told About Communism Is Wrong: Capitalism Is a Failure, Revolution Is the Solution.”)
North Korea is a militarized, paternalistic society ruled by a narrow stratum of bureaucratic state capitalists. It is a stagnant and stifling society that operates according to a coercive social contract: the masses will be taken care of if they work harder and harder for the survival and benefit of the nation. The masses are kept passive and suppressed in this neo-capitalist welfare state. There is nothing revolutionary... nothing uplifting... nothing radically transformative about North Korea.
3. The North Korean economy does not operate according to socialist principles. Economic development has been carried out through vast mobilization and speed-up campaigns to raise production and productivity based on appeals to nationalism, promises of material reward, and honor.
4. Communists are internationalists—starting from the interests of the people of the world. Threatened by imperialism, the rulers of North Korea have viewed the world and their tasks through the ideological filter of preserving national independence and building up industrial-military might in the face of imperialist threat. A genuine socialist revolution in a Third World country does face the task of defending its independence—but this must be carried out as part of and to serve the larger process of carrying out a profound social revolution that is part of and contributes to the advance of the world communist revolution


FOR AN ANALYSIS OF SOUTH KOREAN CAPITALISM READ FOLLOWING :

FOR ANALYSIS OF CURRENT US STRATEGIC BACKGROUND TO  KOREAN CONFLICThttp://democracyandclasstruggle.blogspot.co.uk/2013/04/the-asian-pivot-us-china-contradictions.html
Posted by nickglais on 4/10/2013 12:56:00 PM

Nick, we shall publis an article in solidarity with north Korea in our monthly review in the next week.

Good to hear solidarity with North Korea in Italy

This RCPUSA is no more than a typically American cult led by a charismatic charlatan.
It is not 'post-Maoist' and has only ever been a parody of Maoism and Mrxist-Leninism.
Remember this fuck-wit society has given us Mormonism, Heaven' Gate, Jonestown and Scientology ad nauseam. Avakianites are another sect, another 'morbid symptom' of a decadent culture.