Afzal Guru did not get a fair trial: Amnesty International 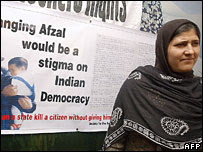 
SRINAGAR, Kashmir – Stating that the Parliament attack Convict  Mohammad Afzal Guru who was hanged on Feb. 09, did not get a fair trial, Amnesty International on Saturday said that the world human rights watchdog had written to President of India stressing to reconsider the death penalty of Guru.

“We as an international organization for human rights do feel that there wasn’t an impartial probe and trial in Afzal Guru’s case.” The three member visiting team of amnesty led by its Director Programme for India V.K Shashi Kumar told KNS on Saturday.

The team also said, “Amnesty had officially written to President of India urging him to reconsider the death penalty of Guru.” Amnesty team added that it was favoring the demand of return of Guru’s mortal remains. “ They (Family) deserves the right to ask for the mortal remains and we support their demand.” Amnesty told KNS.

The human rights watchdog also lashed  at Chief Minister Omar Abdullah saying, “He is not serious in repealing Public Safety Act in the state.”

“As Chief Minster he could simply issue an executive order if he was serious to repeal the act.” The team told KNS, however they accused Omar of resorting to dilly delay tactics with regard to revocation of the act.

Stating that pressing for repealing of PSA in Jammu and Kashmir was their single point agenda, the team said, “Under the garb of PSA, political leaders in the state particularly in Valley are put under house arrest.”

The chief Executive Officer of Amnesty for India Chapter G. Ananthapadmanabhan said that it was not the time to seek a temporary amendment, but a complete revocation of the controversial law.

“PSA is such a law that is entirely against the international human rights laws, because this law interferes in the democratic rights of the civilians.” G. Ananthapadmanabhan told KNS, adding that raising voice against the controversial laws was the duty of amnesty international.

They said that during the current visit the team had approached Chief Minister Omar Abdullah and desired to handover the letter of the human rights watchdog personally, but according to the team, Chief Minster was not serious and did not give them appointment.
Posted by nickglais on 4/06/2013 01:14:00 PM