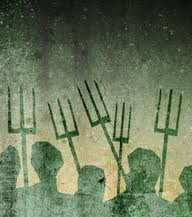 8th April 1421:  It was on this date that Maredudd ab Owain surrendered, and 'armed' Pobl Glyndŵr, under his command in Eryri, layed down their arms.

But, others did not and their struggle, as  Gwerin Owain - Outlaw Rebels, would continue for many years, certainly up to 1529, the year of another threatened 'Welsh Revolt' and, later, in the form of the 'Banditti' who were hunted down by Rowland Lee in a further pacification of Cymru to make way for the Annexation Acts of 1536 and 1548.

I am of the mind to believe that these Gwerin Owain aka 'Banditti' of the upland wastes and isolated valleys would, in time, become the later 'People of the Pitchfork' who would struggle to retain their rights of Tai Unnos and occupation of the commons throughout  Cymru by resisting the English and anglicized Cambro Lords from seizing and enclosing their peoples land.

Out of this struggle came that cry of ‘peoples struggle’ 'Trech Gwlad Nag Arglwydd' that has echoed down the ages to which we now, in a contemporary Land and Liberty struggle,  add to the call to action of 'Cymrwch y Tir Yn Ol'.

It is this struggle for Land and Liberty which we now see as the foundation of our cause, campaign and struggle to restore Cenedl Glyndŵr and a Senedd Glyndŵr of a Cymru Rydd.
Towards such ends, Embassy Glyndŵr now seeks to advance it's work further as a means of enhancing conditions for the establishment, development and advance of a true National Liberation Struggle and Mudiad Cenedl Glyndwr - Mudiad Cymru Rydd which will be carried forth in, both creative and commemorative ways -  as in our Gwaith Glyndŵr and through Teyrnas Glyndwr but also associated with a Tarian Glyndwr as a radical dynamic campaigning Initiative against all who seek to Exploit our Country, Communities and Colonial Underclass as well as expropriate our Land and it's natural resources.

Over the coming years 2013 – 2016 -  to 2021, all possible will be worked  tirelessly to advance towards success but, such will only be possible if Patriots now swear allegiance to Cenedl Glyndŵr and become Pobl Glyndŵr and Gwerin Owain 'activists' of Tarian Glyndŵr. 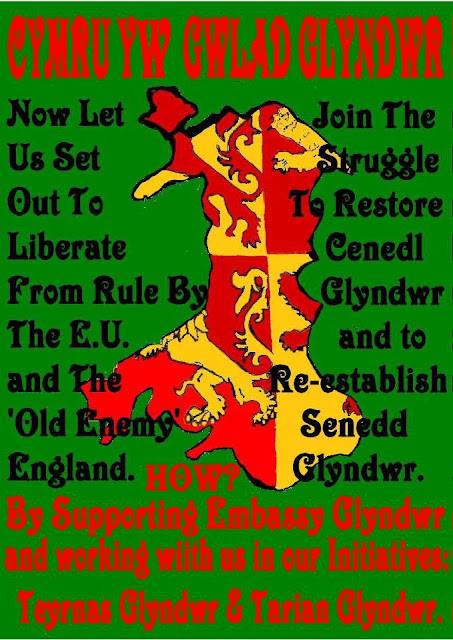