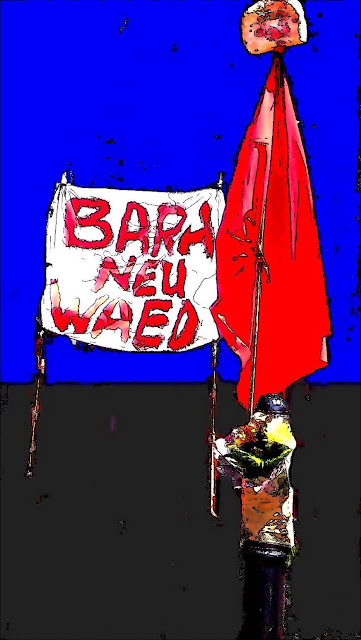 The Welsh Socialist Republicans believes the only class in Wales which is capable of leading Wales to the new democracy of autonomous self government in Wales is the working class. That is true Welsh Independence !

The task must be to win over Plaid members, not split and plsit and split again. Half of the people considering getting involved with Gethin's protest would not feel affinity with pure marxist rhetoric, so let's steer away from that particularl dead end.

Get real. The ways things are going there won't be any Welsh left in Wales beyond Swansea, the Valleys, Cardiff and Newport. Do you think for one moment that those who retire/downsize/move to the coast/country from East of Offa's Dyke share your revolutionary ideals!

Plaid are far from perfect, but as things stand they're all we have.

The comment of closet racism was not directed at Plaid but what we call the nationalist fringe - so called nationalists who push a racist and anti English agenda - if you have not met them or come across them you lead a sheltered life - Welsh independence will need the support or the working class in England and those that think we do not need working class support from England are deluded.

The "Anti English nationalist fringe" reads to me like a reference to Plaid Cymru full stop. Perhaps you should clarify your wording on this!

I don't doubt that some members are openly angry and resentful towards England and the English at the state of things in Wales, but you're still rejecting Plaid despite your recognition any truly hostile people are a "fringe". Either way, the working class of England, regardless of their undoubted sympathy for the plight of Welsh communities can't vote in Wales so shouldn't we look to our own salvation instead? Or do you have something else in mind other than "solidarity"?

Meantime, Leanne Wood could be what we've been waiting for.

Solidarity is what I had in mind - if Wales rejects neo Liberalism in deeds and not just words it would get a lot of support from working people in England and Wales could be a beacon or base area for Socialism in these Islands.

My problem with Plaid is that they talk the talk but do not walk the walk - in my post on the Council Elections I pointed out how the people of Bliana,Nantyglo and Abertillery responded to national assistance cuts in 1935 which frightened the National Govt of it's day and they stopped further cuts in national assistance.

If Leanne was a Phil Abraham I would support her. Phil Abrahams talked the talk and walked the walk and if Plaid councillors risked prison rather than make the Con Dem cuts so would a whole lot of working class people in Wales stand by her side.

But as I said deeds not words are how you judge leaders and the militant Plaid Cymru is dead and is history - long live the struggle for a new Welsh Socialist Republican Party.

I see your point, but Plaid have moved on from a "protest party" to a party of government. I think it would probably be disastrous to court prison sentences, at least in most people's eyes. They have to continue to expose the fundamental injustice of Westminster rule and the exploitation of Wales, and seek a relationship of equals for the nations of Britain. That is what a majority of English folk seem to want by now as well judging by the opinion polls on devolution. The enemy is not national identity and mutual respect, it's unrestrained capitalism!