Are Leaders Good and Necessary ? From Miners Next Step of 1912 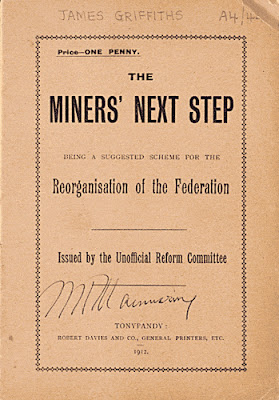 This is not a double question, since if leaders are necessary, they [are] perforce good. Let us then examine the leader, and see if he is necessary. A leader implies at the outset some men who are being led; and the term is used to describe a man who, in a representative capacity, has acquired combined administrative and legislative power. As such, he sees no need for any high level of intelligence in the rank and file, except to applaud his actions. Indeed such intelligence from his point of view, by breeding criticism and opposition, is an obstacle and causes confusion. His motto is, "Men, be loyal to your leaders." H[i]s logical basis: Plenary powers. His social and economic prestige, is dependent upon his being respected by "the public" and the employers. These are the three principles which form the platform upon which the leader stands. He presents, in common with other institutions, a good and a bad aspect.

THE GOOD SIDE OF LEADERSHIP


THE BAD SIDE OF LEADERSHIP

Finally he prevents the legislative power of the workers.

An industrial vote will affect the lives and happiness of workmen far more than a political vote. The power to vote whether there shall or shall not be a strike, or upon an industrial policy to be pursued by his union, will affect far more important issues to the workman's life, than the political vote can ever touch. Hence it should be more sought after, and its privileges jealously guarded. Think of the tremendous power going to waste because of leadership, of the inevitable stop-block he becomes on progress, because quite naturally, leaders examine every new proposal, and ask first how it will affect their position and power. It prevents large and comprehensive policies being initiated and carried out, which depend upon the understanding and watchfulness of the great majority. National strikes and policies, can only be carried out, when the bulk of the people see their necessity, and themselves prepare and arrange them.