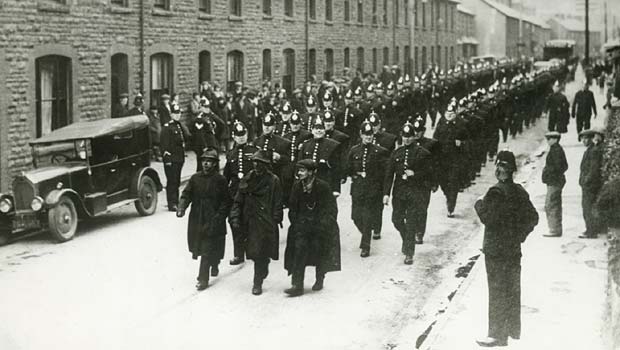 Phillipa Jenkins aged 102, from Dinas, Wales, was 22 years old and working as a teacher at the time of the General Strike.

'My most vivid memories are of marches and open-air meetings. I remember being scared when the 'blacklegs' [strike-breakers]were set upon. I was teaching locally, so my salary was OK. I was one of the lucky ones. But my whole family was heavily connected with mining - my father and grandfather worked in Dinas pit . My grandfather was killed underground.People were very kind and rallied round. Shopkeepers worked hard to help people and there were soup kitchens set up. The local chapel helped too and people formed jazz bands and held carnivals to kept up morale.

The miners were in such a sorry state: hungry and bedraggled - and uncaring mine owners living in posh houses set up a lot of resentment. I believe the General Strike taught me that there are harsh times in life and things can get out of control. I supported the strike. The coal owners wanted to cut the wages. A lot of people were left without jobs. People who had taken part in the strike were victimised and lived in poverty. Suicides were prevalent. Surrendering was very humiliating, but the people of Rhondda never forgot the struggle and the roots of socialism were born. People resented authority but respected fair play and wanted to change things for their children. Ultimately the trade union movement was stronger for it.'

Between 1921 and 1936, 241 mines closed in South Wales, and the number of miners in employment fell from 270 000 to 130 000. There were several contributory factors; new fuels, such as oil, were cheaper, Welsh coal was expensive to raise, and there was a loss of markets. The problem was not confined to Wales however; it was a problem throughout Britain.

In 1925, the owners responded to these problems by asking the miners to accept cuts in their wages and work an extra hour per day. The miners refused and so the Government intervened by paying the owners a subsidy to balance their losses.

A Royal Commission was set up and in 1926, it concluded that the industry was in need of re-organization and that some miners should accept wage cuts. The owners insisted on large cuts, whilst the Miners Federation of Great Britain fought these proposals on the slogan ‘Not an hour on the day. Not a penny off the pay’. On the 30th April 1926, the miners who refused the cuts were locked out and Britain’s coalfields came to a stop.

The TUC called all trade unionists to strike, and between 3rd and 12th May, Britain was paralysed as most of the British workforce came out on strike to support the miners.

On the 12th May, after only nine days, the other unions returned to work as the TUC had managed to agree terms with the Government. The miners carried on their strike until the end of the year when starvation sent them back to work.


Democracy and Class Struggle says what is the message for today from the General Strike of 1926, well like Hetty Bower said it was still better to fight, even if you lose in the short term, in the long term you will have brought a new understanding and enlightenment to some people.


Phillipa Jenkins was right when she said ultimately the trade union movement was stronger for it.


So resist the Coalition Government and its austerity today - however hard the struggle and remember today those who struggled before us in 1926.