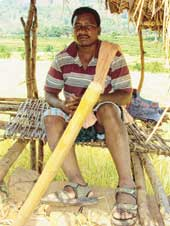 The quasi-political organisation, Chasi Mulia Adivasi Sangh, operating in Odisha’s Koraput and Malkangiri districts, has often been described as the frontal wing of the Andhra-Odisha Border Special Zonal Committee of Maoists. The organisation has been in the news since the abduction of Jhina Hikaka in March. It was alleged that the abduction was the result of a deal going sour between the BJD and the Sangh. Speaking to The Telegraph from a secret location in Narayanpatna, Sangh leader Nachika Linga maintained that the deal had taken place.


lIs it true that the Sangh is a frontal organisation of the Maoists?


We fight for the tribal rights and have nothing to do with the Maoists. Our mission is to destroy all the illegal manufacturing units of country liquor operating at our villages and give the land that the government has forcefully taken away from the tribal community back to them.


lBut why did the Maoists demand release of the Sangh members while they were negotiating with the government on Hikaka’s release?


The Maoists support our work for the tribals. They also feel that the Sangh members, who have been arrested, are innocent.


lWhat is your fight with the government about?


We want the government to give back the land taken away from the tribal people. Plus, the government should address basic problems, such as lack of irrigation facilities and healthcare centres and scarcity of teachers in schools. There is no anganwadi centre operating in Narayanpatna. Around 84 per cent people live below poverty line in Koraput. It’s been more than 60 years since we got Independence, but the government has paid no heed to our basic needs.


lYou are on the “most wanted” list of the state police. There are over 60 cases against you ranging from murder to waging war against the state.


These are false allegations. The government should set up an inquiry commission on this before issuing arrest warrants against me.


lDid you have an agreement with the BJD in which you said you would help the party win the Koraput zilla parishad’s presidential post if it agreed to your demands?


Yes that was the deal. MLAs, including Jayaram Pangi and Jhina Hikaka, signed it.


We wanted the government to remove all criminal charges against our members, who were earlier acquitted by the judiciary. Plus, we asked for an independent inquiry into the Narayanpatna police firing that took place in November 2009, in which our comrades Andru and Singhana were killed. We also asked for prohibition of liquor at our villages and all-around development. But, none of our demands has been met so far. Hikaka did not speak to chief minister Naveen Patnaik about our demands.


lThe Maoists took a written undertaking from Hikaka that he would resign as an MLA after his release. But, he hasn’t resigned yet. Does that mean he may be abducted again?


The Maoists released Hikaka because he was a tribal. Since Hikaka hasn’t kept his word, there is a possibility that he may be abducted again. He should now severe ties with his party and work for the people, especially for those in the most backward blocks — Narayanpatna and Bandhugaon.


We have over 35,000 members. Our fight against the government will intensify in the coming months. We are planning to form a parallel governance system with the help of villagers to take care of our needs. Also, our uncontested elected leader, Juro Mauka, in the Koraput zilla parishad would ensure that welfare schemes reach our villagers.