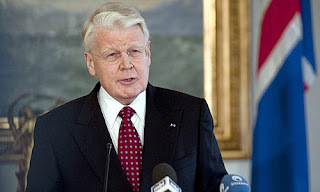 Democracy and Class Struggle says with all the discussion around the crisis in Greece and the Eurozone there is very little coverage of the recent crisis in Iceland because it does not follow the standard neo liberal script and is therefore ignored by British media.

Whilst Greece is in the Euro this adds an obstacle to her economic recovery which Iceland did not have to contend with, nevertheless, the lessons from Iceland's response to economic crisis is the most instructive in Europe and should be more widely known.

The president of Iceland sits in his study drinking tea from an immaculate china set. “If a collapse in the financial sector can bring one of the most stable and secure democracies and political structures to his knees as happened in Iceland,” Ólafur Ragnar Grímsson says to me, “then what could it do in countries that have less stable democratic and political history?” The tiny country is unique not only in its stunning geography but also in its open democracy.

This democracy was pivotal in the choice to let three giant banks fail during the financial crisis. For Ólafur, the crisis of 2008 was personal. Once the darling of the left wing, he worked as finance minister for several years before he became president of the country in 1996, a largely ceremonial role that he’s inhabited ever since.

Like many in the country he was once a cheerleader for Iceland’s financial sector, privatized at the start of the 21st century — and the sudden collapse was a painful reminder that Iceland was a small, isolated place.

Now, of course, most headlines we see about Iceland seem positive. Iceland is repaying its IMF loans early, unemployment is down, and growth is above average. The streets of Reykjavik seem calm and happy. Other countries, of course, haven’t been so lucky.

The crisis remains front page news in Greece, Italy and Spain — countries that followed a very different response from Iceland’s. Ólafur argues that his country’s strength came from recognizing the problem was not just an “economic and financial challenge”, but a “profound social, political, and even judicial” challenge. After the crisis, the country held a full judicial investigation, and went against “the prevailing economic orthodoxies of the American, European and IMF model.” Ólafur says that he likes to think that the IMF learned more from Iceland during this time than vice versa. A key example of this approach is Iceland’s refusal to pump money into failed banks.

The decision was controversial at the time, but now looks increasingly wise. “I have never understood the argument — why a private bank or financial fund is somehow better for the well being and future of the economy than the industrial sector, the IT sector, the creative sector, or the manufacturing sector”.

There is, of course, another aspect. A tricky situation arose when the U.K. and Holland demanded money for their citizens’ depleted Icesave accounts, and Iceland refused. The incident sparked a major diplomatic scuffle, with Iceland refusing to pay out and the U.K. even using “anti-terrorism legislation” against the state. For Ólafur, it’s also a personal aspect. He was head of state, though he did not control the government — in effect his position was more like being an elected Queen of England than being Barack Obama.

But constitutionally he had the right to veto government legislation — though it had never been used by his office previously. Ólafur decided to block government legislation to pay back the U.K. Twice. Both times the legislation went to a nationwide vote, and failed. “It was absolutely very tough indeed,” Ólafur says. “Every big financial institution, both in Europe and in my own country was against me, and there were powerful forces, both in Iceland and Europe, that thought my decision was absolutely crazy.” The decision was hugely controversial, and remains a sore spot in relations. For him, it was a matter of history. “What is our primary legacy to countries and nations in modern times?” He says, “Europe is and should be more about democracy than about financial markets.

Based with this choice, it was in the end, clear that I had to choose democracy.” He also blames the British for their role, specifically Gordon Brown, by whom he believes Iceland is owed an apology. Ólafur likens the situation to the Falklands war, adding it was a “great offense” that “one of the most peace-loving countries in the world, a founding member of NATO, a strong ally of Britain during the Second World War was put together with al-Qaeda and the Taliban on the official list of terrorist organizations.” Iceland essentially had no choice, Ólafur says. “If you take the relative size of the Icelandic economy and the British economy,” he explains, “and you transfer over to the British economy the sum that the British government was asking the Icelandic taxpayers to be responsible for due to the failure of this private bank, it would have been equal [...] to asking the British taxpayer to be responsible for an £800 billion bill [$1,275 billion] for a failed British bank in Spain and Italy and Greece.” Adam Taylor / Business Insider To Ólafur’s credit, the Icesave debts are likely to be settled soon, using money from the estate of Landsbanki.

He believes that if the U.K. and Holland had waited a while longer there would have been no conflict. After 2008, Icelandic relations with Europe may have been strained. It was during a dinner with foreign diplomats that year that Ólafur reportedly said “The North Atlantic is important to Scandinavia, the U.S. and Britain.

This is a fact these countries now seem to ignore. Then, Iceland should rather get some new friends.” I also can’t help but notice that one of the reception rooms in the Presidential residence contains prominent photos of Ólafur with Vladimir Putin and Hu Jintao — and not a single photo, to my eyes at least, of a European leader. Ólafur dismisses the quote, going on to say that his problem isn’t Europe, but the European and American banking system.

He says Iceland’s lesson is that

he adds, later blaming the huge growth of Iceland’s banking sector on the prevailing European banking philosophy and incompetent rating agencies. Instead, the country is hoping to use not only its creative and intellectual capital, now freed from the finance industry, but also its unique geographical situation.

“The Arctic has become one of the most crucial regions for the future of the world, both in terms of economy, trade and climate and health,” he says, adding that he feels Iceland, a member of the Arctic Council, has a ten year head-start on the issue, which is now attracting the interest of the EU, China and South Korea — countries with no geographical claim on the area. This future is something that Ólafur clearly sees himself as a part of. He had originally told the country that he would not run for president again — he had been in office for 16 years and felt he could work better without the day-to-day stress. However, after an online petition circulating managed to get 30,000 signatures last month, Ólafur decided to run for a fifth term.

The elections will be held in June. While other candidates have come forward, that 15 percent of the population who have already signed up would likely give Ólafur reason to believe he will win.

He says it was the “public will” of Iceland that caused him to change his mind. “If a large part of the nation wants me to continue, I will bow to that public will,” he says. “But if that turns out to not be the case, that’s also fine with me.”