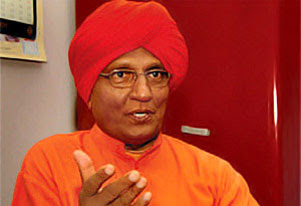 I feel disappointed. I doubt Chidambaram's intentions, if he is really serious in ending the problem as he claims," Agnivesh said in an interview.

The saffron-clad activist, who in 2010 was appointed by the government as an interlocutor for the now-broken down peace talks with Maoists, said the recent spurt in abductions and violent incidents was "only due to the government's non-seriousness" in resolving the issue. Left-wing extremists in Odisha kidnapped two Italians in March, released one after 11 days and the second almost a month later.

Insurgents had demanded release of their cadres from jails but none was set free with the government claiming that they were looking into the demand. Agnivesh doesn't call it the defeat of Maoists. "They never intended to kill them. It is for you to decide if it is their defeat or greatness." Asked if he was justifying abduction or killing people by Maoists, the activist said nobody endorses violence. "I condemn every incident of violence, be it killing or kidnapping.

But you should also look at what is happening to impoverished tribals. Some 1,700 of them are in jails without any charges." Agnivesh expressed his "utter disgust" over the widespread "military operations" in Maoist-infested areas in the name of security. "This operation Green Hunt... it is a military operation, but the real intent is to grab the natural resources and distribute them to a few corporate houses," he said, alleging that Chidambaram was in "cohort" with business people who want to "loot the resources from mineral-rich parts of east and central India". "Chidambaram is more violent than Maoists.

He is the biggest murderer of democracy," said Agnivesh, recalling how top Maoist leader Cherukuri Rajkumar alias Azad was "killed in a cold- blooded murder". Agnivesh had started talks with Azad in May 2010 and had sought his consent to initiate a dialogue with the government. But just when the process was to kick off Azad was gunned down in a shootout with Andhra Pradesh police that was alleged to be staged. But the government denies this.

"He was shot at in point-blank range. Encounters don't happen at such a short distance," Agnivesh said. His petition for an independent judicial probe was rejected by the Supreme Court recently but the activist has not given up. "We will travel through the country and tell the people the truth. We will mobilize youth and expose this government of corrupt people who serve interests of none but business houses."