Plaid Cymru, the Labour Party and connecting with the people – Great Unrest Group 2012 observations on the Welsh Council Elections 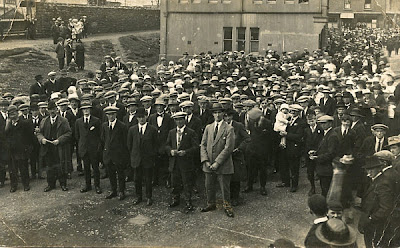 March to the Public Assistance Committee in 1935

Clearly the Labour Party in Wales connects better to the people because it is seen as the champion of class issues which are more important to most Welsh People than Welsh national issues.

Whether the Labour Party is a true champion of the working class is another issue, that is how they are perceived and perception is what bourgeois politics is all about.

Plaid Cymru is not seen as a working class party to champion working class issues, but has a party of cultural nationalists and until this perception is changed Plaid Cymru is condemned to the margins of politics and Welsh Independence will be a pipe dream.

Electing a leader from the valleys does not change the perception of Plaid Cymru only militant defense of the working class interests will.

How many Plaid Cymru councilors would not just vote against council cuts but risk going to prison to oppose cuts in Wales ?.

Has our comrade Gethin ap Gruffydd says they talk the talk but do not walk the walk.

In 1935  Phil  Abraham and 10 others in Blaina and Abertillery were send to prison for fighting the national assitance cuts by the then National Government following the Blaina Riot of 1935.

Phil Abraham’s talked the talk and walked the walk, and the National Government changed its policy of further cutting national assistance, fearful of full scale revolt in the Valleys of Wales.

Sweet talk from Leanne Wood will take Plaid Cymru nowhere, radical action in the sprit of Phil Abrahams will.

The task facing Welsh Socialist Republicans is to create a political movement where working class and national interests converge and become indistinguishable.

When the Welsh national party is recognized as a working class party we will have arrived on the political scene.

We have Wales to Win, we have a World to Win – Long Live the Great Unrest Group 2012 for a Welsh Socialist Republican Party.