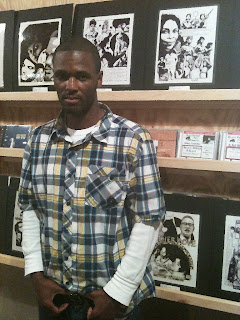 (Radio Basics also interviewed John ‘Mac’ Gaskins back on October 3, 2011 about ongoing practices of torture that he and others have experienced at Red Onion State Prison in Virginia. To download that interview, click here).

Steve da Silva / BASICS: You were telling us tonight how you spent half of your life in prison – after catching some cases when you were younger. Here you are now, 31 years of age and on the outside as revolutionary and a New Afrikan Black Panther. Can you briefly recount how you arrived at where you’re at today?
John ‘Mac’ Gaskins: Well, my story doesn’t differ much from most guys raised in urban settings. I’m from Richmond, Virginia, and born into a single-parent home. My mother is from the bottom of the working-class. As a kid, I would watch my mother go to work, working two jobs that were never enough to secure the basic necessities for me and my sister. So early on I decided that I had a distinct role to fulfill. At about the age of ten, I had this friend who taught me how to go into stores, open up the food products and eat and drink until we got full and exited the store. But eventually, I realized that this wasn’t doing anything to help my family.

So I actually started stealing products, bringing them out of the store and to my family so we could prepare meals. As this went on, the activity just progressed until I got into robberies. But I had certain moral compunctions from the start though. I never robbed a common working-class person, old ladies, anything like that. It was drug dealers, commercial establishments, and people that I felt like they were criminals themselves, either pumping poison into the community or people who have these commercial establishments in the community but don’t live in our communities and are only extracting funds from us. Ultimately, over time though I would take on some traits of an illegitimate capitalist, and this would ultimately lead me to prison at the age of 17.

My incarceration would actually begin before this though. I started going to jail when I was about 14, I spent about 2 ½ years in “Juvie” (Juvenile Detention). So that was preppin’ me for what was coming in the future, these 14 years that I would spend in prison. So ultimately I went to prison and I would endure all the practices that take place there, everything from having my fingers broken to being bit by dogs, to being strapped to a bed for days and being forced to defecate and urinate on myself. I would go without meals for days at a time, my mail was being hindered. Not having access to a telephone. I was at these “Supermax” prisons out in the mountains and I didn’t get visits. My family couldn’t afford to come visit me. I was feeling every ounce of the weight of this system and this was for me where the political education began.

I met alot of my current comrades in prison, [Kevin 'Rashid' Johnson'] and Kaysie. These brothers introduced me to important figures like George Jackson, Mao, and Che Guevera. This gave me a new way of viewing the struggles that I had been a part of thus far, whether that was trying to feed myself on the streets or battling the guards. Ultimately, I would go on an join the New Afrikan Black Panther Party, operating in my capacity as the Minister of Information. I would also co-found SPARC (Supporting Prisoners and Acting for Radical Change). SPARC created this inside-outside connection, to ensure that with every act on the inside there has to be a corresponding act on the outside. Since I got out of prison [three months ago], we’ve been trying to better coordinate the struggles inside and outside the prisons.

SD / BASICS: It seems to me that you’re a living example of the line of the NABPP – which is to transform the prisons into “Schools of Liberation”, so that when your cadre step out the prison gates they’re ready to be a positive force for revolutionary change in society. And that’s what you yourself are doing. Can you tell us a little bit about how you understand the need for a revolutionary Party that organizes the working class?

Mac: First of all, prisoners are an untapped reservoir of revolutionary potential. These guys have nothing vested in the current system, so these are our soldiers. It’s just like when I go into the poorest communities, these people who be living at the bottom of society, this is where we wanna build our base and headquarters. Among the core principles of the Panthers is going into communities, living amongst people, learning about their needs, and organizing people around those needs as a means of raising mass consciousness.

By the government’s inability or unwillingness to do so, they’ve shown that they’re not addressing the basic needs of people. People are in the predicament their in now out of decades of governmental neglect and indifference. So its the role of the Panthers to be that vanguard in the communities.
But what is long range politics to people who can’t put food in their stomachs tonight? To people whose very lives are not guaranteed for tomorrow? We’re living in communities that are over-policed, they’re ridden by crime and poverty. You have whole communities that are excluded from any economic and social participation. So it’s our role to go amongst these people, learn about their needs, and organize them around those needs.

BASICS: You were telling us earlier about the need for ‘Serve the People’ programs to organize and uplift the people, which revolutionaries from Huey Newton to Mao Tse-Tung stressed the importance of. What are these ‘STP’ programs and how are you building them where you’re at, in Washington D.C.?

Mac: I think that one of the most important programs are those that are feeding people. What is [Mao's] little Red Book gonna mean to a mother who can’t put food in her children’s stomachs tonight? So that’s at the top of the agenda, creating free food programs. Winter time is coming and its getting cold, so we wanna get some clothes out to people in the communities. We wanna get some condoms out there, talk about the dangers of unprotected sex, talk to the teenage girls about pregnancy. We are also trying to get some sort of visitation transportation out to the prisons so they can visit their loved ones. We also wanna build re-entry programs for prisoners. The Panther line is all about addressing any problems and needs that the people are having in the communities. If there’s a pot-hole in the road, we gonna get us a bag of gravel and cement and we gonna fix that.
The people learn through observation and participation, so the Panther is gonna be that example in the community.

BASICS: Any thoughts on the state of this continent, where things are going, and what we need to do?

Mac: Conditions have never been more ripe for revolutionary change. People all over the world are participating in revolutionary struggles. We’re talking about the empowerment of the masses. We want the unconditional freeing of the people. That entails the liberation of the means of production and distribution. At this point, we’re gonna start with basic STPs, and these ain’t gonna change basic social conditions in and of themselves. But if people are gonna make revolution, they first have to survive. We are an internationalist organization, and we uniting with all working class people around the world. Now is the time for people to take their own destiny into their hands. All power to the people man, and thanks again Steve.
BASICS: Thanks again for being with BASICS.

‡Note‡ The New Afrikan Black Panther Party should not be confused with the ‘New Black Panther Party’ The NABPP that is the subject of this interview is a revolutionary communist prison-based organization (though building on the outside) that advocates for internationalism and organizing amongst all poor, oppressed and working class people in America. The ‘New Black Panther Party’, by contrast and in complete opposition to the original BPP – is a cultural nationalist organization that is not internationalist or communist, and does not uphold the leadership of the working class.