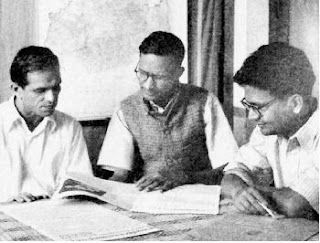 At a meeting of the polit bureau of the Communist Party of India in 1945 in Bombay, (from left) B.T. Ranadive, G. Adhikari and P.C. Joshi.

Communist Party of India was formed on October 17, 1920 in exile in Tashkent of then Soviet Union and it was recognized by Communist International in 1921. Since then some youth with communist ideology started working for propagating socialist ideas through their writings and speeches. For nipping in the bud of this movement Kanpur conspiracy case was filed on them alleging that they were propagating Bolshevism and organizing farmers and workers against the government. Muzaffar Ahmed, S A Dange, Shaukat Usmani, Nalini Bhushan Dasgupta and others were arrested. On November 5, 1925 Workers and Peasants party was formed in Bengal. Communist Party organizations are formed under different names in various parts of the country.

In 1923, thousands of workers from 56 mills went on strike for 2 months protesting against the wage cut of 20% imposed on them. Thousands of workers from Bombay had participated in struggles and demonstrations in 1924 demanding for the representation of workers in legislative assemblies and voting rights and opposing the retrenchment in railways and against the police force against agitating workers and in the “Simon Go Back” movement in 1928. Though working class was not able to take up the leadership of political movement it had militantly participated in it. In 1928-29, the textile workers of Bombay went on general strike. Since 1927, May Day was dutifully celebrated every year.

In spite of the fact that trade union movement in India was being led by bourgeoisie leadership since its inception, the militant struggles between 1926-29 had attracted many communist revolutionaries into its leadership.

The political conditions prevailing in the country had created a necessity for the working class to have a united front. At that time AITUC had the followers of different ideology- communist, congress socialist and Royist (M N Roy). With growing struggles the membership in trade union also started increasing. From 1945, workers’ strikes became widespread. In 1945 there were total 820 strikes and they became 1629 in the year 1946. There were many strikes in all the industrial centers of Bihar, Bengal, Orissa, Punjab, United Provinces, Bombay and Madras provinces. For suppressing these movements organized by the working class, British government resorted to brutal acts of suppression like arrests, torture and indiscriminate firing. Many workers were martyred. The indefinite strike by Postal and Telegraph workers in July 1946 is very significant one. In 1947, Congress Party split the trade union and formed its own union.

The principle shortcomings in Proletarian Struggles:

As AITUC was a joint forum for both Congress and Communist party until 1947, there were considerable limitations in practicing working class politics in it.

Working class had lost the consciousness to provide leadership not only for themselves but for the emancipation of oppressed people of all sections and for the change in the social system.

It had forgot the task of leading the farmers in agrarian revolution. They didn’t consider the lesson from the experiences of proletariat revolutionary struggles that there can be nothing to the masses without people’s army.

There was considerable dissent was brewing in the students and youth because of the comprador politics of Congress Party in protecting the imperialist interests in the name of nonviolence at the time when British imperialists were applying brutal violence on freedom movement.

These students and youth had hoped to end the British rule through force. They decided to create conducive atmosphere for armed struggle by eliminating notorious British officials, by neutralizing the administration and by inspiring the masses through their daring acts. Important among in shaking the British imperialists were Gadar party heroes, Bhagat Singh, Raj Guru, Sukhdev.

Bengal, Maharashtra, Punjab became centers for their revolutionary activities. They studied and propagated modern warfare and guerilla tactics. They were attracted to socialist ideas after the 1917 October revolution. They inspired the masses with their slogan of ‘Inquilab Zindabad’. They tried to organize revolt of soldiers. To contain this revolutionary upsurge British imperialists resorted to cruel repression, built many conspiracy cases and mercilessly hanged many of them.

They lacked the scientific understanding of the laws of social development and couldn’t appreciate the fact that “masses are the real history makers”. As they believed that daring acts of heroes will create the history, they couldn’t create base among the masses and depended on American and Germany imperialists.

Peasant Revolts and other mass struggles:

Anti imperialist struggles were not confined cities and towns but extended to remote rural areas. Farmers, students, youth, employees and a section of Indian infantry, navy and police had also took part in the anti-imperialist revolts and carried out armed revolts.

Chittagong rebellion had special importance. Chittagong rebellion was planned to create model for the people by liberating a particular region from the British imperialism. Revolutionary group under the leadership of Surya Sen had conducted this rebellion. At 10 O’ clock in the night of April 18, 1930, they had simultaneously attacked and occupied police armory and associated military armory. They completely destroyed the information network. British officials sped away and a revolutionary provincial government was established under the leadership of Surya Sen. Immediately after this in another incident sepoys belonging to Garwal regiment refused to open fire on the agitating masses in Peshawar. Similarly another important incident was the revolt of workers in Sholapur of Maharashtra. British government was taken a back temporarily by this strike and re-occupied the town after 49 days only by declaring Marshal law.

Quit India movement in the larger extent was primarily a farmers, revolt. The peasantry had fought against the British imperialism using guerilla tactics and establishing parallel government in many places. In this struggle about 1600 farmers were killed in the police firing.

The revolutionary upsurge followed after the defeat of fascism in second World War through out the world also had shaken India. Unity was visible among all sections against imperialism. Naval uprising took place in 1946. Bombay as center and with the support of town population, this revolt was extended to Madras Karachi and many other places. This uprising using slogans like ‘Jai Hind’, ‘Inquilab Zindabad’, ‘Long live Hindu Muslim Unity’, ‘Down with the British Imperialism’, ‘Azad Hind Fauz Zindabad’, ‘Release all Political prisoners’, ‘Recall the Indian Army Immediately from Indonesia’ had shaken the British imperialism. Government had brutally suppressed this revolt killing 250 and putting thousands of people in jail.

Worli Adivasi struggle in Maharashtra was organized in 1945 by Communist Party against outside landlords, forest contractors and moneylenders. Tebagha movement in North Bengal was also led by Communist party. The communist youth activists from Calcutta went on to organize the land tenants demanding the reduction of land rent from 60% to one third. During this struggles farmers seized the crops. About 20 Santhal Adivasis were killed in the police firing at Baluru Ghat during this movement.

There was a significant change in the struggles of 1946-47. The farmers revolt in the rural areas of Bengal, Kerala and Telagana were led by the farmers organizations affiliated to Communist Party. Poor and middle class farmers, land tenants, landless farm laborers and Adivasis had participated in these movements.

Reasons for the Defeat of these Revolts:

There was no revolutionary political party with correct political and military line. Because of this there was no proper objective and independent strategy and tactics were developed to train the people in class struggle. They didn’t form a secret party to face the strong enemy. As a result they couldn’t coordinate the militant struggles in a planned manner.

As all the sections of masses who took part militantly in these struggles particularly, workers, peasantry, Adivasi masses, soldiers from Indian army and navy who were willing to rebel, students, youth and intellectuals were not armed to build a strong people’s army, these struggles became victims of brutal suppression. Mao’s teaching the people can’t have any thing without the people’s army was once again proved in these revolts.

There was no proper anti-imperialist united front action program to protect the people’s unity and isolate the enemy and a joint leadership to lead such front. People wanted unity in the anti-imperialist struggle but there was no unity among leadership of Congress, Muslim league and Communist Party. The disunity, lack of preparedness and the weakness in leading a national struggle was proved.

In all these revolts Congress and Muslim League parties stood by the British imperialism and extended all the possible help.

Role of Communist Party of India:

Communist Party of India didn’t take up the responsibility of advanced and independent and leadership of the Indian national democratic revolution. It didn’t take up correct political and military line to succeed revolution in India. It wrongly analysed the different classes in India. It assessed enemies as allies and trapped into rightism. It recognized the comprador bourgeoisie as national bourgeoisie and wrongly analysed the class character of Indian bourgeoisie and adopted class collaboration in place of class struggle. It couldn’t defeat Gandhism and nonviolence theory through Marxist class outlook. It couldn’t formulate correct strategy and tactics for succeeding Indian democratic revolution and couldn’t select correct revolutionary line which means protracted people’s war. It couldn’t form a secret revolutionary party, strong revolutionary people’s army (Red Army) and United Front of all the forces willing to come forward to fight against a common enemy by creatively applying the proletariat revolutionary experiences of Russia and China. With this it worshipped spontaneity, confined to legalist methods and trapped into economism with a reformist outlook. It under estimated the British imperialism and left out the independent tasks of a Communist Party. As a result it couldn’t developed into a strong secret party invincible to enemy and lead the war. It couldn’t organize farmers, workers, rebel soldiers and oppressed masses to form a new people’s army (Red Army) to defeat the modern army of the enemy. Though every revolt was taken into armed struggle adopting guerrilla tactics they were not intensified and advanced into mobile and stationary wars. As a result it couldn’t plan for countering the treacherous attacks of enemy and failed in converting the potentialities and human resources emerged from the revolts into a disciplined people’s army.

Because of the failure in establishing a new united people’s government in places where the government of the enemy was destroyed through farmers and Adivasi revolts and failure in completing the task of seizing the political power area wise, these revolts had faced the enemy’s fascist repression and the leadership was eliminated. Unable to take up the task of agrarian revolution of distributing land to poor and landless farmers on the basis of ‘land to the tiller’ in a planned manner, Communist party couldn’t coordinate all the revolts with agrarian revolution. As a result all these revolts were isolated and couldn’t attract the support of large masses.

For a PDF of Comrade Ganapathy Book visit here :
https://sites.google.com/site/sakethrajan/book-lic-is-the-cruelest-war-on-revolutionaries.pdf?attredirects=1
Posted by nickglais on 5/06/2012 08:47:00 AM