On 15 April 1918, Maclean was arrested for sedition. He was refused bail and his trial fixed for 9 May in Edinburgh. He conducted his own defence in a defiant manner, refusing to plead and when asked if he objected to any of the jurors replying, "I object to the whole lot of them."

The prosecution case was based on the testimony of witnesses who had attended his meetings, who quoted extracts from his speeches using notes they had written up from memory after the meeting. Maclean objected to his words being taken out of context, saying. "The main parts of my speech, in which my themes are developed are omitted. I want to expose the trickery of the British government and their police and their lawyers." 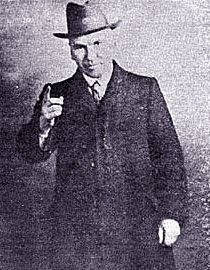 This speech from the dock has passed into folklore for the Scottish left. Lasting for over an hour, Maclean's speech began :

"I had a lecture, the principal heading of which was “Thou shalt not steal; thou shalt not kill", and I pointed out that as a consequence of the robbery that goes on in all civilised countries today, our respective countries have had to keep armies, and that inevitably our armies must clash together. On that and on other grounds, I consider capitalism the most infamous, bloody and evil system that mankind has ever witnessed. My language is regarded as extravagant language, but the events of the past four years have proved my contention.... Maclean delivering his famous ‘Speech from the Dock’.

It has been said that they cannot fathom my motive. For the full period of my active life I have been a teacher of economics to the working classes, and my contention has always been that capitalism is rotten to its foundations, and must give place to a new society. I had a lecture, the principal heading of which was "Thou shalt not steal; thou shalt not kill", and I pointed out that as a consequence of the robbery that goes on in all civilised countries today, our respective countries have had to keep armies, and that inevitably our armies must clash together.

On that and on other grounds, I consider capitalism the most infamous, bloody and evil system that mankind has ever witnessed. He went on to say: I wish no harm to any human being, but I, as one man, am going to exercise my freedom of speech. No human being on the face of the earth, no government is going to take from me my right to speak, my right to protest against wrong, my right to do everything that is for the benefit of mankind. I am not here, then, as the accused; I am here as the accuser of capitalism dripping with blood from head to foot.

I have taken up unconstitutional action at this time because of the abnormal circumstances and because precedent has been given by the British government. I am a socialist, and have been fighting and will fight for an absolute reconstruction of society for the benefit of all. I am proud of my conduct. I have squared my conduct with my intellect, and if everyone had done so this war would not have taken place. I act square and clean for my principles. .... No matter what your accusations against me may be, no matter what reservations you keep at the back of your head, my appeal is to the working class. I appeal exclusively to them because they and they only can bring about the time when the whole world will be in one brotherhood, on a sound economic foundation. That, and that alone, can be the means of bringing about a re-organisation of society. That can only be obtained when the people of the world get the world, and retain the world. He was sentenced to five years penal servitude, and imprisoned in Peterhead prison near Aberdeen.

However, a militant campaign was launched for his release: "The call 'Release John Maclean was never silent. Every week the socialist papers kept up the barrage and reminded their readers that in Germany Karl Liebknecht was already free, while in 'democratic' Britain John Maclean was lying in a prison cell being forcibly fed twice a day by an India rubber tube forced down his gullet or up his nose. 'Is the Scottish Office' asked Forward. 'to be stained with a crime in some respects even more horrible and revolting, more callous and cruel, than that which the Governors of Ireland perpetrated on the shattered body of James Connolly?' " Following the armistice on 11 November, he was released on 3 December 1918, returning to Glasgow to a tumultuous welcome.
Posted by nickglais on 5/17/2012 01:50:00 PM