CPI Maoist Statement -“Observe ‘Bharat Bandh’ on 16 May against the proposed fascist NCTC, against continued assaults on the people by the government armed forces under Operation Green Hunt and against the deployment of Indian Army in Bastar!” 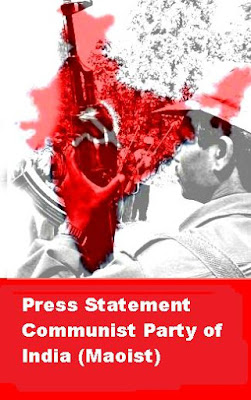 Communist Party of India (Maoist) — Dandakaranya Special Zonal Committee: Press Release (4 May 212) “Observe ‘Bharat Bandh’ on 16 May against the proposed fascist NCTC, against continued assaults on the people by the government armed forces under Operation Green Hunt and against the deployment of Indian Army in Bastar!”

The Indian state is relentlessly continuing its extremely brutal attacks on the people of the country, particularly the adivasis, in the last two and half years in the name of Operation Green Hunt. The police and paramilitary forces unleashed by the ruling classes are perpetrating acts of ‘encounter’ killings, mass murders, sexual assault, torture, burning of villages, destruction of crops and grains, plunder of peoples’ property, wanton arrests and forced ‘disappearances etc.

These forces have carried out the cold-blooded murder of more than 250 adivasis in the last two and half years in Dandakaranya alone. The objective of this war on people is to uproot the ongoing Maoist movement in the country, particularly in its central and eastern regions. The comprador bureaucratic bourgeoisie and the imperialists are in desperation to loot and plunder our beloved country which is richly endowed with vast mineral, forest and water resources. From 2008 in particular, in the context of the deepening world economic crisis, they are scheming many a conspiracies to cheaply exploit the natural resources and labour power available in underdeveloped countries like India.

After concluding MoUs involving investments worth lakhs of crores with the comprador governments and by undertaking the large-scale destruction of jal-jangal-zameen, these forces are displacing a large number of people from their homes and hearths. The people too have risen up against this aggression. CPI (Maoist) is leading the people in this struggle and is standing with them. This is the reason why the Maoist movement has become the biggest hurdle before the exploitative ruling classes and their government led by the Sonia-Maonmohan Singh-Chidambaram-Jairam Ramesh ruling clique.

However, the threat felt by the ruling classes from the Maoist movement is being propagated by them as ‘the biggest threat to the internal security of the country’ with an aim to deceive the masses. The ruling classes are portraying their imperialist-dictated neo-liberal policies of destitution, destruction and death as ‘development’, and are branding anyone as ‘anti-development’ who is opposed to such anti-people policies. They have singled out the Maoists in particular as the target of such misinformation campaign carried out through the pliant corporate media which is conducting a widespread propaganda-war against the Maoist movement by terming it as ‘anti-development’, violent and terrorist.

The ruling classes are extremely terrified by the alternative model of development presented by the masses in the Maoist struggle areas, particularly in the Dandakaranya region where the people have destroyed the political power of the local feudal and reactionary forces through class struggle and have established organs of people’s power in their embryonic forms. It is under the leadership of this peoples’ government and through its initiative that this alternative model of development based on self-reliance and cooperation is taking shape.

The ruling classes have undertaken its brutal offensive in order to wipe out this nascent revolutionary society and its path of people-oriented development. The imperialists, particularly US imperialism, are not only guiding this offensive but are also directly or indirectly participating in it. The proposed NCTC (National Counter-Terrorism Centre) too is being set up as per the diktats of US imperialism which is not only a threat to the basic rights of the citizens of the country but also is a severe blow to its so-called federal structure. As a part of this military aggression, Indian Army was deployed in Bastar a year ago.

This is not an issue merely confined to Bastar or Dandakaranya alone. The purpose of this army deployment is to crush the countrywide revolutionary movement. However, this deployment is being done under the garb of ‘training’ in order to mitigate the protests and opposition to the use of Indian Army against the people of the country – an army meant for confronting enemy forces of foreign countries.

The Chhattisgarh government has decided to hand over 750 square kilometres of forest land in the Maad region to the army for ‘training’ purposes. This is a glaring proof of the manner in which the government itself is the biggest violator of the statutory prohibitions on the transfer of adivasi land to non-adivasi owners – be it the Fifth Schedule, PESA and other laws. The intention of the army, which is presently ‘training’ at a point between Narayanpur and Kondagaon, is to gradually cross the Narayanpur town and to occupy the interior villages of Maad. The top brass of the army are personally overseeing this ‘training’ programme. Raids and attacks under Operation Green Hunt are being conducted for the last one year under the command of the Indian Army in which armed forces are being deployed in brigade-level formations.

From 3 to 5 thousands of government armed forces and commandos are being utilised for each such massive attack. In October 2011, five thousand personnel of CRPF, Cobra, C-60 forces and local police conducted a heavy assault in Dhanora tehsil of Garhchiroli district which comes under Gyarahpalli and Malewada police station parameters. In this massive military operation, 19 villages were attacked and 12 villagers were arrested.

The government forces beat up many other villagers. They entered many houses and looted them. More than a thousand government forces set up many ambushes covering a parameter of 35 kilometres and 16 villages of Bijapur region from 24 to 27 November 2011. In this way they unsuccessfully attempted to kill our important leading comrades. Again on 19 December a big airborne attack was carried out by using helicopters on Chhote Kerwal and Baade Kerwal villages of Dantewada district. Police and paramilitary forces were sent simultaneously from Polampalli, Kistaram and Vejji police camps through 15 helicopters.

These helicopters made several sorties during the operation. At the same time armed forces from three directions arrived at that place. Some villages of these two villages were completely destroyed during the attack and a total of 12 persons were arrested. Cash money worth thousands of rupees and other valuable material were looted by these mercenary forces from several houses. They also attempted to rape a woman.

Nearly two thousand government armed forces carried out a heavy assault from 27 February to 1 March 2012 in Ganglur area of Bijapur district. The DIG personally led this operation. 13 persons were arrested during this operation which targeted Edsum, Irmagonda, Maddum and Kawar villages. Maad region was encircled and simultaneously attacked from three sides – from Bijapur and Narayanpur districts of Chhattisgarh and from Garhchiroli district in Maharashtra – as per a massive military offensive by three thousand armed forces. This operation was named ‘Operation Vijay’ and ‘Operation Haka’.

While many IPS officers directly carried out and led this operation, the Director General of CRPF Vijay Kumar along with the Inspectors General of Chhattisgarh and Maharashtra police prepared its blueprint. An adivasi villager of Toke village named Dunga Dhurwa was murdered by the government forces while around 25 villages were attacked and plundered. Lalsu of Goddelmarka village was ‘disappeared’. Thousands worth of cash money and many valuables were looted. Nearly three thousand adivasis of Dandakaranya are presently confined in the prisons of Chhattisgarh, Maharashtra and Andhra Pradesh. They have been framed in many false cases as a result of which they are languishing in the dark cellars of prisons without any access to judicial redress or bailout.

The condition of many of them is such that even if they were convicted of their crimes after the completion of the judicial process, they would have come out of jail by now after completing their jail terms. Many of them have been able to even engage any lawyer due to poverty and backwardness.

Family members are prevented from meeting their relatives in prison, so much so that many of the prisoners are under conditions of mental agony. This is not just the condition of Dandakaranya, but the same situation prevails in Jharkhand, Bihar, West Bengal, Andhra Pradesh and Odisha. Simply put, the prisons of the country are being filled with adivasis so that the ground beneath the feet of the adivasis can be then handed over to the corporates.

The people and the democrats! The Central Committee of our Party has given the call for a 24-hour ‘Bharat Bandh’ on 16 May to stop the fascist attacks on the people of the country by the exploitative ruling governments, to prevent the deployment of army in Bastar under Operation Green Hunt, to send back the armed forces camping in the pretext of ‘training’, to unconditionally release the adivasis and political prisoners confined in the jails of the country, and to demand the scrapping of the proposed fascist NCTC. This Bandh will primarily be observed in Andhra Pradesh, Jharkhand, Bihar, West Bengal, Chhattisgarh, Odisha, and in Gondia, Chandrapur and Garhchiroli districts of Maharashtra.

Our Special Zonal Committee appeals to the people of the entire country to successfully implement the bandh. Emergency services such as health and students’ examinations will be exempted from the bandh.