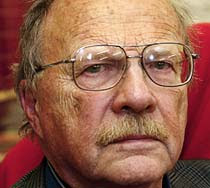 In the latest of its fascist move to strangle all voices of dissent and criticism, the Indian state has decided to ban any future visits of reputed Swedish scholar Jan Myrdal to India, for his support for the people’s movements in India. Recently the Ministry of State for Home Affairs, Jitender Singh made the statement in parliament that any future visit of Jan will be completely banned as he has been found guilty of ‘advising’ the CPI (Maoist) and doing propaganda on their behalf.

Historically, world over, pro-people intellectuals and scholars have always stood by people’s movements for their basic rights. Jan Myrdal too throughout his life has stood steadfast beside anti-imperialist movements and struggles. He led the movement against US war on Vietnam, in Europe and Sweden and has also written prolifically to support people’s movements in Palestine, Afghanistan, China and other places in the world. In India too he has made several visits in the past and has interacted and written about the Indian situation and people’s resistance. In 2010, at the age of 83, he travelled extensively in Dandakaranya, to have a firsthand experience of people’s resistance against the state backed war on people in the name of Operation Green Hunt and also of the larger struggle of adivasis for their land, lives and livelihood. There he also met the top leadership of CPI (Maoist) and interviewed the general secretary of the party.

Based on his experiences he wrote a book "Red Star Over India. Impressions, Reflections and Discussions when the Wretched of the Earth are Rising." The book has already been widely sold and reached its second edition in India and is being translated in various other regional languages like Bengali, Tamil, Telugu, Punjabi while more contracts are being discussed.

The book is an extremely analytical and outstanding critique of Indian state’s undemocratic and anti-people policies and people’s mounting resistance against that. This year he was invited by the Kolkata book Fair to launch the book in India, which was followed by a series of lectures in Kolkata, Hyderabad, Ludhiana and Delhi. In Delhi, the Forum against War on People invited him to speak on state repression. The students of Jawaharlal Nehru University also invited him to deliver the First Naveen Babu Memorial Lecture organized to commemorate the martyrdom of Naveen Babu, an ex-student of JNU who was killed by the state forces in AP on February 10, 2010.

Jan’s entire itinerary was known to the home Ministry and all his lectures and writings were published and made public. The only reason the Home Ministry is raising such an unfounded hue and cry is because they are not being able to face the issues, concerns and sharp criticism that Jan has raised and the fact that he being a scholar of such repute his criticism will be well received and taken seriously by the world. He out rightly said in one of his lectures in Delhi that it was a war against the people for simple economic reasons. Greed and profit. That is a truth even officially documented by the Government of India.”

It is the reiteration of this simple truth coming from someone as reputed and well accepted as Jan, that the Indian government cannot accept and hence has become alarmed. Jan himself has come forward and justified his visits to India and clarified his purpose rebutting the propaganda of the Indian state. He has clearly said in a letter to Swedish foreign minister he has written “The intense discussion and debate in India is not reflected in our media in the Western countries.

That is not due to any official Indian censorship (as the British one in India during WW2). It is due to the censorship of the editorial "gate keepers" in our media (and the self censorship of our correspondents in India)”.

And he rightly believes more interaction and exchanges from activists across the world is a basic necessity of the current times to forge a broad based anti-imperialist solidarity. The proposed ban on Myrdal therefore is nothing but one more fascist stranglehold over voices of dissent and protests.

The Indian state is implementing a series of repressive measures to criminalise protest and to suppress voices and forces of dissent and resistance. On one hand it is waging the most bloody war on people with the use of paramilitary, army, police force, air force and vigilante gangs; on the other hand it is banning and proscribing political parties, mass organizations, cultural fronts and arresting people under false charges. It is using the corporate media to run a psychological warfare by maligning people’s movements with vicious campaigns.

Off late the Indian IB is also harassing woman activists by sending fake audio and videos and mails with slanderous contents. The proposed ban on Jan is just another of the effort by the Indian state to muffle strong voices of critiques. The progressive and democratic forces in India and the rest of the world must raise their voices to oppose such a fascist tactic by the Indian state. The proposed ban on Jan Myrdal must be withdrawn with immediate effect.

Sign the following petition to Stop the ban on entry to India of Jan Myrdal here:

i condemn the indian states ban on jan