Greek elections: the vengeance of a people in struggle! by Panagiotis Sotiris 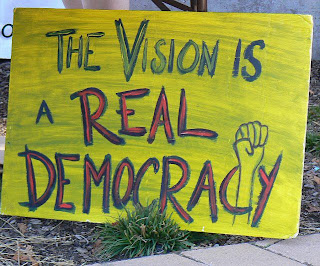 Vengeance came down hard, with the force of an earthquake, in Greek elections. Despite the efforts by corporate Media, despite the various forms of open blackmail from the part of the EU – IMF – ECB Troika, despite the timing of the election in order to steal some form of support for at least some of the pro-austerity forces, the results of the election are an explosive rejection of the politics of austerity and limited sovereignty in Greece. They are a massive blow to the attempt to turn the European Union into an ‘iron cage’ of aggressive neoliberalism and ‘internal devaluation’. It is the proof that the policies included in the loan agreements with the EU and the IMF have lost all legitimacy. Insisting on their implementation is not simply a total disregard of the will of the people, but something equivalent to a coup d’etat.

The electoral results speak for themselves. PASOK and New Democracy, the two parties of the coalition government under Papademos, lost more than 3 million votes and from a total of more than 76% in the 2009 elections, have now a total following of little over 32%.

PASOK a party that has been in power longer than any other party in recent Greek history reached a humiliating 13.20%, its lowest score since 1974. New Democracy did not manage to gain from the fall of PASOK, also had its worst electoral result (18.85%) and saw the splinter ‘Independent Greeks’ party, reaching more than 10%. The total of all pro-austerity parties is less than 42%, a clear evidence of the rejection of neoliberal policies.

Syriza (Coalition of the Radical Left) is in second position with 16.78% (the last time the Left had such a position was in 1958) and total percentage of the Left (SYRIZA, Communist Party and Anti-capitalist Left) is at almost 27%, which is the largest electoral presence of the Left in modern Greek history.

To give an image of the political crisis of traditional ruling parties the sum of all votes cast for parties that did not reach the minimum 3% threshold required to enter parliament is bigger than the total votes casted for New Democracy.

All these attest to a political system in open political crisis, the result of social devastation brought by austerity policies and extreme unemployment. That is why the bigger losses for both New Democracy and PASOK came in Athens, greater Athens and Piraeus area, and other major cities, the urban areas mostly hit by austerity and unemployment.

It is in those areas that SYRIZA manages to be the leading party, a historical change in electoral trends in Greece.

Of course, there is also the fact of the rise of the neo-nazi Golden Dawn, which from a marginal position reached almost 7% and enters parliament with an openly racist and fascist rhetoric and a long history of violent attacks on immigrants and left-wing militants.

The electoral success of the fascists was fuelled by the cynical turn to open racism from the part of both PASOK and New Democracy, but also from the fact that it looked like an ‘anti-systemic’ vote to the eyes of insecure and disillusioned voters.

That is why creating collective practices of struggle and solidarity, instead of leaving people to individual despair and insecurity, is the best way to confront the fascist challenge.

Despite the rise of right-wing reactionary tendencies – the ‘Independent Greeks’ despite their anti-Troika rhetoric actually support a mixture of nationalism and aggressive neoliberalism –, the main beneficiaries of the rejection of austerity policies have been the parties of the Left. SYRIZA has an important success, which must be attributed to its choice to call for a ‘government of the Left’.

Despite the lack of radicalism of its program, exemplified in SYRIZA’s refusal to challenge the EU and call for an immediate exit from the euro, its emphasis on unity of the Left and on the possibility of a left –wing government helped it gain the support of a large part of the electorate that looked for an alternative. SYRIZA was also helped by the sectarianism and defeatism of the KKE, the Communist Party, which ostensibly undermined any possibility of unity of the Left and insisted that it is impossible to see change in the foreseeable future.

The anti-capitalist Left, ANTARSYA, the only tendency of the Left that openly called for an immediate annulment of debt payments and exit from the Eurozone, managed to triple its votes, reaching 1.2%; but it is obvious that it came under pressure from SYRIZA.

The result of the election, which makes it hardly possible to actually form a lasting government (since there is no obvious majority coalition), means that a new election is going to be held soon. In the meanwhile, one can expect more blackmail from the part of the European Union and the International Monetary Fund, mainly though threats that any change of policies will jeopardize public funding, in the hope that such fear might force some of the voters to return to mainstream parties. However, this is a bet far from sure, in the sense that current changes in electoral behavior reflect deep social divisions in Greek society and consequently blackmail can lead to the opposite result.

This means that the Greek Left is facing an enormous historic challenge. Two years of intense struggle and bitter austerity measures have led many people to ask for a radical alternative. This cannot be simply a ‘progressive government’ that will attempt to avoid austerity while remaining within the embedded neoliberalism of the Eurozone and the systemic violence of debt. It must be an attempt towards forming a new ‘historical bloc’, a broad social and political alliance around a anti-capitalist program of radical social change.

This program should include immediate stoppage of debt payments, exit from the Eurozone and regaining monetary sovereignty, nationalization of banks and strategic infrastructure, and a vast program of reconstruction of production along socialist lines, based on the initiative, collective experience, ingenuity, and self-management by the struggling people. Such a ‘historical bloc’ must seek political power, not only in the sense of a left wing government but also and mainly in the sense of a change in actual social power configuration.

Without a strong labor movement, without radical social movements, without the full development of all forms of people’s power and self-organization, any government of the Left will not manage to stand up to the immense pressure it will get from the forces of capital, the EU and the IMF. The challenge is great, difficulties important, but the last two years have shown that in Greece history is not being written according to neoliberal textbooks, but according to the collective will of the fighting people

[1] Panagiotis Sotiris teaches social and political philosophy at the Department of Sociology, University of the Aegean. He can be reached at psot@soc.aegean.gr.