Democracy and Class Struggle salutes May Day 2012 - To overcome the crisis of capitalism, proletarian revolution is the only solution ! 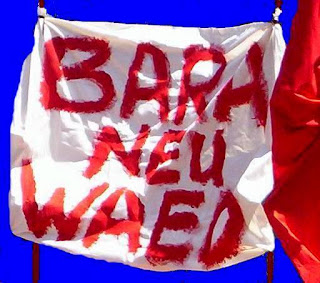 Bread or Blood ? The Cry from People of Wales in 1831 when they first raised the Red Flag in Wales.


“The conditions of bourgeois society are too narrow to comprise the wealth created by them. And how does the bourgeoisie get over these crises ?


On the one hand by enforced destruction of a mass of productive forces; on the other, by the conquest of new markets, and by the more thorough exploitation of the old ones.


That is to say, by paving the way for more extensive and more destructive crises, and by diminishing the means whereby crises are prevented.

But not only has the bourgeoisie forged the weapons that bring death to itself; it has also called into existence the men who are to wield those weapons — the modern working class — the proletarians.”

165 years after its writing, this quote remains relevant. It allows us to understand the situation in which the proletariat and the broad popular masses in all countries find themselves, regardless of who leads the government: they live under a concealed dictatorship, be it a bourgeois democratic or a brutal one.
The imperialist bourgeoisie is looking for the maximum rate of profit; it is using the crisis as a pretext to achieve this objective by restructuring the system of production. Within this, the ruling classes in the oppressed countries try to maintain and possibly increase their share in the surplus. Such restructuring is affecting all countries; for the working class and the masses, it means the delocalization of large industries: plant closings, wage cuts, unemployment, debt, impoverishment, etc. But in the places where the new plants are to be opened, restructuring means land grabs, expropriation of local farmers, frenzied exploitation, poverty wages, destruction of the environment, etc.
The ruling classes use the state apparatus to suppress the proletariat’s struggles and prevent them and the masses from revolting and organizing for the revolution. Everywhere, the State is more and more becoming a police state that brings the population under surveillance and repression.


Whether it is the “left” or right, no segment of the bourgeoisie has the capacity to solve the crisis. The persistence of the crisis prepares the ground for fascism; fascism is advancing in disguise. It is building step by step through populist demagogy, relying on the economic crisis. In due time, it will show its true colors by aggressively defending the interests of finance capital. Meanwhile, competition between the different monopolist blocks raises the question of redivision of markets and therefore suggests new wars are on the horizon.
The class nature of the state is the central issue. The form it takes is only circumstantial. The primary purpose of the state is to serve the interests of the ruling class, that is to say, those of the imperialist bourgeoisie and/or of the comprador-bureaucrat bourgeoisie and landlords in the oppressed nations —which is a tiny minority compared to the vast majority of men, women and children who are facing exploitation worldwide. Given the crisis, this is becoming clearer to the masses. The central task of any revolution is to radically destroy the state apparatus and, thereafter, to build on its ruins a new and radically different state, with the objective of building socialism as a means of transition to communism. In other words, revolution is the only answer to the crisis!
Today, the proletariat and the masses are struggling and rebelling in many countries. These rebellions are expressed in different and varying ways: through general strikes, by fighting against high prices, against layoffs, for the right to work, against the crushing of militant trade unions, for the right to land, to protect the environment, through occupation of housing and empty land, youth rebellions against police violence and a life without work and without future, struggles of women, etc.
In the Arab countries, after the uprisings that lacked a revolutionary leadership, the ruling classes and imperialism are regaining control of the situation in the name of “democracy;” they are enforcing the same rule of exploitation against the people by opposing the continuation of the revolutionary process. The protest movement’s focus is being diverted by imperialist interventions, by reactionary forces,  secular or religious reformists are crushed bloodily.
In the Arab oppressed countries, as well as in all the colonial and semi-colonial countries, it has become more and more important to develop the New Democratic Revolution, as part of the socialist revolution.
In the imperialist countries, the “Occupy” movement is reflecting the massive discontent of the people, but it does not sufficiently challenge the system in its entirety. These proletarian struggles and rebellions are not revolutionary in and of themselves but they are a first step in the realization by the masses of the necessity of revolution. However it is important to unmask the path and illusions of a peaceful change, alternation, and deceitful elections.
Today’s communists (the Maoists) must participate in and gradually take the lead of those struggles. They must build the revolutionary force of the proletariat at the ideological, political and organizational levels, and especially the three essential tools of revolution: a Maoist Communist Party, a revolutionary United Front, and an Armed Force, according to the particular situation.
We must struggle against reformists, revisionists and opportunists who lead the protest struggles with a conciliatory spirit in the existing trade unions and mass organizations; they only offer “solutions” within the current capitalist and imperialist system, spreading the illusion among the masses that the electoral and peaceful path may be a solution for the proletariat and the masses to overcome the crisis. They are an obstacle to the expansion of class struggle and the organization of the working class and the masses for revolution.
Meanwhile, the reactionaries are using differences of origin, religion and racism to divide the proletariat, the working class and the popular masses, as a trick to preserve their power.
Everywhere we must popularize and support the people’s wars currently being waged as spearhead of the fight against the crisis of imperialism.
Led by the CPI (Maoist), the People’s War in India is successfully resisting attacks from the enemy and is managing to expand and grow. The People’s War is also unfolding in the Philippines under the leadership of the Communist Party of the Philippines, which upholds Maoism. In Peru, it is continuing despite the action from a liquidationist current. In Turkey, the revolutionary struggle led by the Maoists is advancing in accordance with the people’s war strategy. In other countries, new initiatives and advances are in preparation.
We must fight in a situation of uneven development to end the capitalist system over the whole world and build a new world free from exploitation, from peoples’ oppression and deadly wars, for a socialist and communist world.
We must work to rebuild the international organization of communists, based on Marxism-Leninism-Maoism; we must apply MLM to the concrete reality of today, to jointly develop the struggle for revolution and establishing a Communist International of a new type.
Long Live Internationalist May Day !