‘The State has to own up to the killings in Green Hunt’ by GN Saibaba, Vice-President, Revolutionary Democratic Front Of India 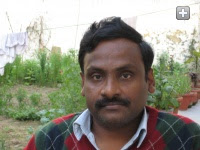 Civil activists like Prashant Bhushan and Binayak Sen have put out an appeal for the release of Sukma Collector Alex Menon. Do you agree?

The collector of a district represents the government in a district. The government has to take responsibility for whatever atrocities and killings are happening in the name of Operation Green Hunt.

It does not matter whether the collector is a good individual or not. Hundreds of people are being arrested and tortured. When there is no mechanism in place to look after their relief, the people are forced to this situation.

This is the government’s creation. There is no point in saying that these things will not happen as if everything else is all right. This is a kind of war-situation where both the government and the CPI(Maoist) are locked in a battle of tactics and counter-tactics.

Maoists have said that they don’t pick on doctors, teachers and honest officials. Why did this happen? Menon was working for tribal welfare. How do you justify his kidnap?

I don’t think Maoists intend to harm Menon. I think the kidnapping has been done to put pressure on the government and also to highlight the condition that exists in Bastar. Otherwise their voice is not heard. Such acts help the Maoists highlight the situation in interior regions.

Of late, we’ve seen a spate of kidnappings. First it was the Italian tourists, then and an MLA in Odisha was kidnapped. Do you think the Maoists are losing their ideological coherence with such acts?

Kidnapping is just a tactic. Three incidents in three months are chance happenings. Because they had a chance to get an MLA or a collector, the Maoists took it.

They have used the situation to highlight the atrocities that are taking place in that area. I don’t think there is a pattern in it. If there was an erosion of the ideology, they could have killed these two people too, but they haven’t.

They have not tortured like the police or the paramilitary forces do in custody. This clearly indicates that they are adhering to their ideology and not resorting to any kind of mindless violence.

Kunal Majumder is a Senior Correspondent with Tehelka.