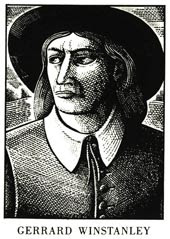 "England is a Prison; the variety of subtilties in the Laws preserved by the Sword, are bolts, bars, and doors of the prison; the Lawyers are Jaylors, and poor men are the prisoners; for let a man fall into the hands of any from the Bailiffe to the Judge, and he is either undone, or wearie of his life."

As our work of the Earthly community is advanced, we must make use of gold and silver, as we do of other metals, but not to buy and sell withal; for buying and selling is the great cheat, that robs and steals the Earth one from another: It is that which makes some Lords, others beggars, some Rulers, others to be ruled; and makes Great murderers and thieves to be imprisoners, and hangers of little ones, or of sincere-hearted men.
Posted by nickglais on 4/23/2012 05:50:00 AM