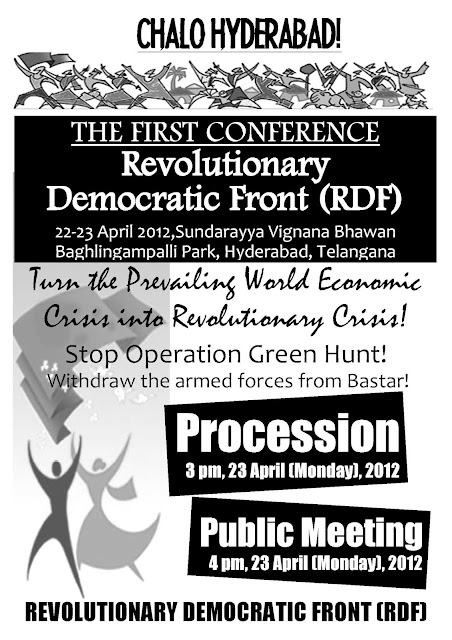 22 April 2012, Hyderabad, Telangana
The historic first conference of the Revolutionary Democratic Front (RDF) – a federation of revolutionary mass organisations working among different classes and sections of the society at the grass-roots level – went underway today on 22 April 2012 in the Sundarayya Vignana Bhavan in Hyderabad with the hoisting of the RDF flag by Goru Madhav Rao, the veteran fighter of the Srikakulam Armed peoples’ uprising and the founding president of All India Peoples’ Resistance Forum (AIPRF). The red flag was hoisted with slogans hailing the ongoing revolutionary movement and condemning the Indian state’s repressive class violence in the form of Operation Green Hunt and now Operation Haka and Operation Vijay. The martyr’s column was unveiled by Mallamma, the mother of the martyred revolutionary leader G. Shankar, also known as Sheshanna and Shamsher, state committee member of the North Telangana Special Zonal Committee (NTSZC) of the CPI(Maoist). Resistance songs were performed by members of Jharkhand Abhen, Praja Kala Mandali and Revolutionary Cultural Front.
In the inaugural session, B. S. Raju, the Secretary of the Reception Committee of the Conference welcomed the delegates and participants, and declared that the RDF stands resolutely in favour of a democratic and separate Telangana state. M T Khan, chairperson of the Reception Committee, condemned the Chhattisgarh government for preventing the 34-member team of delegates from that state coming to attend the conference.
Professor Jagmohan, noted democratic rights activist and the nephew of shaheed Bhagat Singh, inaugurated the 40th issue of Samkaleen Jan Pratirodh, the magazine of RDF, dedicating it to the people of India and the Indian revolutionary struggle. Pankaj Dutt, the renowned people’s intellectual and academic presented the Keynote address on economic crisis and possibility of revolutionary upsurge in the country. He analysed the confluence of imperialism and feudalism in a semi-feudal and semi-colonial reality like India, which then generates what is usually understood as ‘growth’ and  ‘development’ which is so disastrous for the vast masses of the country. He noted that it is the poor and landless peasantry – so far denied the power to exercise their labour creatively – who holds the key to the change of property relations and thereby turn the present world economic crisis into a revolutionary upsurge for a complete social transformation.
Arun Ferraira, the civil rights activist who has recently been released after years of incarceration in Nagpur jail for allegedly being a Maoist, unveiled the collected writings of Comrade Anuradha Ghandy titled Scripting the Change. In his short speech Arun noted that in her life as revolutionary, Anuradha has significantly contributed to our understanding of the Dalit question and the womens’ question in the context of semi-feudal semi-colonial India. He dedicated this book to all the martyrs who have given their lives to the cause of the Indian revolution.
One of the main speakers of the conference, Syed Ali Shah Geelani, the Chairperson of the All Parties Hurriyat Conference, Jammu and Kashmir, was welcomed by GN Saibaba, the Deputy Secretary of RDF. Saibaba stated that Kashmir has a continuous liberation struggle of 40 years, and RDF not only supports it but is also a part of it. RDF plays the role of bringing together and uniting all the fighting movements of the subcontinent, including the revolutionary struggle, national liberation movements of Kashmir, Nagalim, Assam, Manipur etc., separate statehood demands of Telangana, Gorkhaland and others, and mass struggles of Dalits, Adivasis, workers, peasants and women.

Sadly the rally at the conclusion of the conference was banned by the Andhra Pradesh govt.This was really sad as now the protest against Operation Green Hunt was curtailed and could not be reached to the broad masses. In all the first 3 A.I.P.R.F.conferences the rally was permitted but on this occasion it was prohibited. A resolution was passed condemning this. The author feels it was undemocratic of the Andhra Pradesh govt to ban it in the name of endorsing “Maoist ‘ideas. Irrespective of the correctness or wrongness of the line or practice of the C.P.I.(Maoist)one has to recognize the revolutionary democratic right of the people of Jharkhand or Dandkaranaya to fight for their rights in an-anti-feudal struggle. Even those disagreeing with the ideology of Maoist forces have to understand the significance of the government prohibiting such a rally and their non- recognition of the C.P.I.(Maoist)as a revolutionary democratic force. It teaches us a lesson on how even our bourgeois democratic right to protest is curtailed even more in ‘Operation Greenhunt. We also learn how much our democratic space has been curtailed. In all the conferences the rallies of the All-India Revolutionary Students Federation were permitted be it in Hyderabad in 1985 or in Madras in 1989. One pertinent observation is the weakness of the democratic Rights movement and a strong democratic Rights organization is the need of the hour
On certain issues the author of this article may have differences be it on the question of casteiesm,nationalities and the line of the C.P.I.(Maoist).Intellectuals like Vara Vara Rao asserted the correctness of the line of the Maoist party claiming it as the only revolutionary party in the country, which the author differs with. The R.D.F.supports active boycott’ of elections which however revolutionary is in the author’s opinion in certain areas not the correct political tactic.(In some areas only active political campaign is the correct tactic) On Dalits the author disagrees with the resolution on Brahmanical feudalism which does not provide an adequate class or Marxist-Leninist analysis and replaces class with ‘caste’struggle.Infact there was a powerful trend amongst intellectuals to endorse this view disregarding the class factor .Infact one spokesman even suggested ‘Brahmanical Imperialism!. I still feel that revolutionary democratic forces have still to be strengthened and mass revolutionary democratic functioning has to be developed to a larger extent. Sadly gone are the days of the Andhra Pradesh Radical Students Union ,Rytu Coolie Sangham or Mazdoor Kisan Sangrami Parishad,which had earlier led historic struggles and open rallies. This again brings the need to develop the mass struggling organizations,inspite of state repression being so intense.

I congratulate the Revolutionary Democratic Front for it’s staging of the conference which has immense significance in the struggle against Operation Greenhunt.It is a tribute to their tenacity that they have defended the struggles in Dandkaranya and Jharkhand and remained a fighting force. The need of building broader independent revolutionary democratic forum to defend the revolutionary rights of the masses is the need of the hour and the 1st conference of the R.D.F.was an answer to it.
.