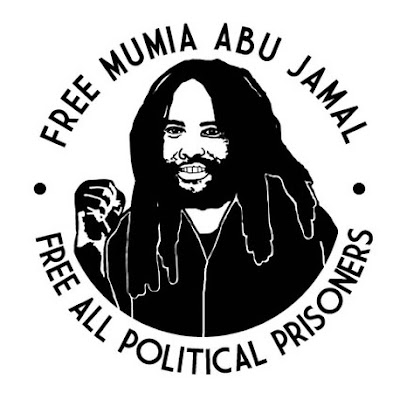 Comrades and Friends, today we celebrate Mumia’s birthday. Mumia is a political prisoner framed for his political beliefs, this is evident from his FBI files which shows that the state had him under surveillance since  he was 14 years old and joined the Black Panther Party.

We celebrate his life of commitment to struggle and continue to fight for his release. Although, no longer on death row he is still serving life without parole for a crime he did NOT commit. We are now demanding that the state release him from prison without conditions and we will continue this fight until Mumia is out here on the streets with us.

Mumia’s case is just one of many former Black Panthers and other  political activists locked up by the state for daring to fight to end this brutal capitalist system.  Under capitalism policing and the prison system play an essential role in intimidating  poor people and therefore the rest of society.

Capitalism produces poverty intentionally through policy as well as through the natural crises of capitalism (ie boom and bust and over production.)   The capitalist system needs poverty because if there are not enough poor people workers become more confident and start demanding more wages and better conditions.

Capitalism feels threatened by poor people because poor people rebel -like last summer’s rebellion against the murder of Mark Duggan and against the conditions of our lives.

How does a system which produces obscene wealth on the one hand and degrading poverty on the other justify its existence.?

It does this by promoting myths  by stereotyping and demonising Black and working people.

The main way that the ruling class, through the state, intimidates the  working class is through unemployment, and through the real force inherent in the Police and prison system. This intimidation is in addition to racist terror against  Black men with extra judicial and vigilante killings.

One of the most recent victims of extra judicial killing in the US was 17 year old Trayvon Martin.  Because Black people are demonised in the US they, like the victims of rape are blamed for what they were wearing when some racist decide that they seem threatening or suspicious.

These lynchings must be seem within the larger historical context of  racist oppression in the US; part of a pattern of instilling fear in the Black population in order to continue exploiting and dehumanising us.

Racist police have been killing our children for years, yet not one police officer has faced charges for the murder of any of the thousands killed in custody or elsewhere over the years. Here in London  Mrs. Asetia Simms and Colin Roach are just two of the murders still awaiting justice 30 years on.

We have to fight to change these racist “Kill at Will” laws. Only by building strong organisations to continue the struggle for justice and bring an end to this outrage.


Protest in US for Mumia Abu Jamal